In a world where more people are struggling with mental health than usual due to COVID-19, younger people have been especially affected. In a UNICEF survey of 8,444 people between the ages of 13 and 29, 46% felt less motivated to do activities they had previously enjoyed.

Sophomore Sam Johnson, who has been diagnosed with Bipolar Disorder, depression and ADHD, noticed how COVID-19 affected their daily life and usual activities.

“[COVID-19] was a big struggle for me,” Johnson said. “I used to be out skating every day, hanging out with people and keeping my life at least in balance and then [COVID-19] hit and you’re trapped inside and couldn’t go out and do anything. That really took a toll on me, especially after school hit. Schooling online isn’t meant to be, and I think that people’s mental health really showed in their grades.” 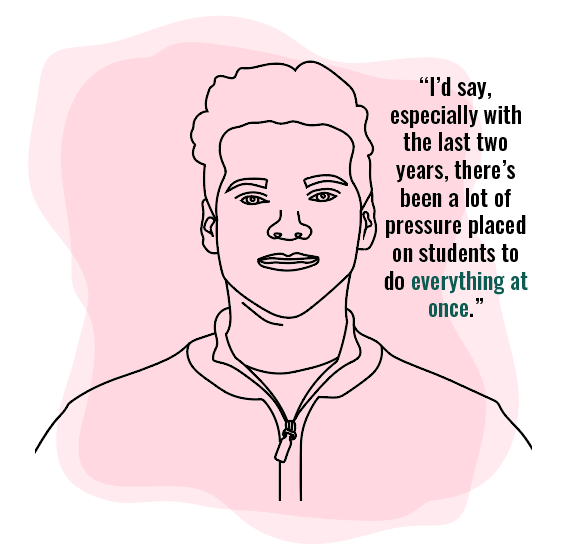 Senior Benjamin Baumgart, who has been diagnosed with anxiety and depression, believes that although school gives him more purpose, it becomes a stressor when he becomes too busy.

“I’d say, especially with the last two years, there’s been a lot of pressure placed on students to do everything at once,” Baumgart said. “For me and for a lot of my friends, it is overwhelming doing classes [and] being in clubs. I’m doing activities like the musical and for a lot of the time, those will help give me a purpose. But [sometimes] it gets to the point where it’s overwhelming.”

According to Johnson, the things that affect mental health cannot be boxed into any category, because it is such a large part of people’s lives.

“I think a little bit of everything plays into mental health because no matter what you’re doing, where you are, who you are and who you’re with, you’re always going through some kind of situation,” Johnson said. “And that situation can turn into anything. It can turn into the best day of your life or the worst day of your life. I don’t think there’s one specific thing that plays into mental health.”

According to school clinical social worker Debbie Gudenkauf, adolescents’ mental health issues can be exacerbated by their brain development.

“High school students typically do not yet have the life experiences that give them the perspective and confidence to know they can get through difficult times,” Gudenkauf said. “They do not have the brain maturation that they will have [in] 5-10 years. That brain maturation will eventually help them understand and rationalize situations. Just because you might struggle as an adolescent does not mean you will struggle all your life.”

Freshman Skylar Smith, who has been diagnosed with ADD and depression, explains that people tend to blame surface-level things for poor mental health instead of underlying issues.

“[A] misconception is that social media, or video games is the cause of the stress and the anxiety. Though, I feel like that’s really the coping mechanism for the stress and for if the stress gets too much,” Smith said. “[To] just attack the video games or the music, just going for what’s on the surface, it isn’t really a good idea for mental health.”