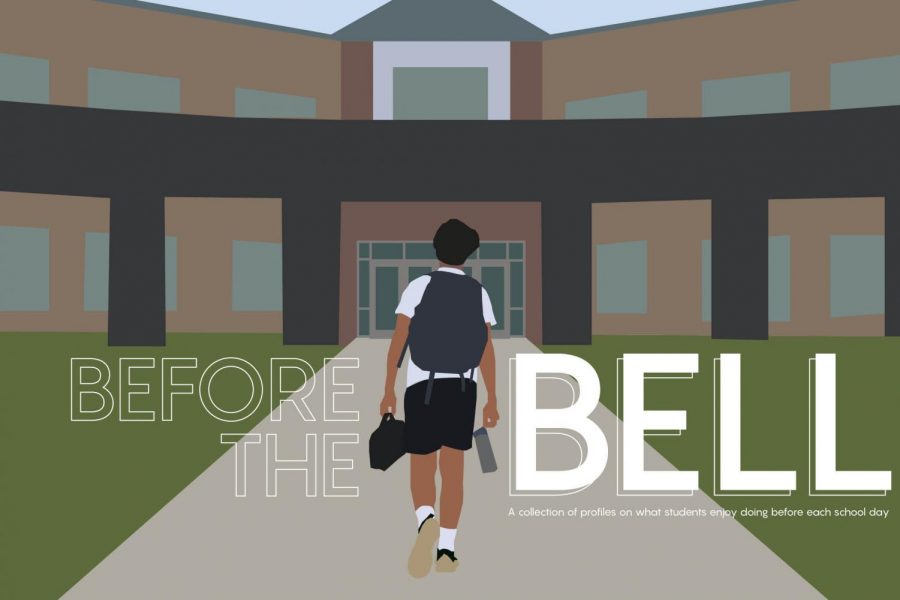 Before the Bell: Students’ lives before school 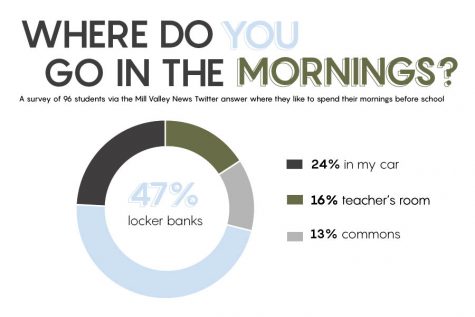 Backpack snug on your shoulders, textbooks in hand, you stroll into school with 15 minutes to spare. Fifteen minutes until the five-minute bell pulls you through your schedule. With the time you have left, what will you do? Maybe you’ll get some extra help on your Chemistry homework or lean against the lockers in the lower B hallway, the metal digging into your back and cold tile fading away as you chat the time away. Of all the places to hang out in the morning, the possibilities seem endless. 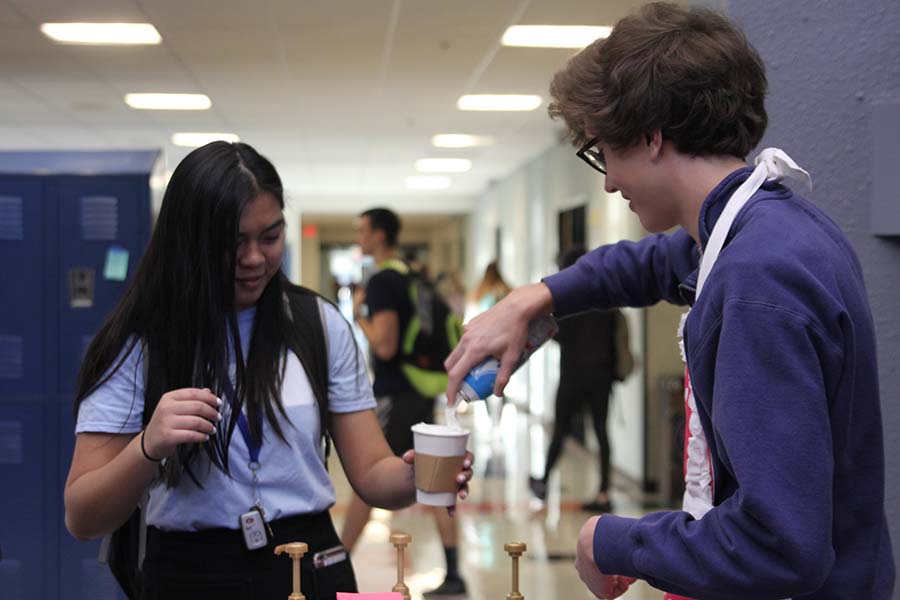 In the main foyer before class on Friday, April 13, senior Brady Watkins works for the Catty Shack and squirts whipped cream on junior Ally Nguyen's coffee. "I like using the whipped cream to express my emotional, artistic abilities," Watkins said.

“Do you want whipped cream on top?” senior Brady Watkins asks the student standing in front of his coffee cart on the morning of Thursday, April 19.

Not only does Watkins have a can of Redi Whip prepared, he also has caramel, peppermint and french vanilla syrups available for customers to pump into their coffee. For just $1.50 before school, students can grab hot chocolate or coffee from his cart beside the main staircase.

Every day since its start, which Watkins says was only a couple weeks ago, Watkins has spent his mornings selling coffee as a part of Catty Shack. Before anybody can jump start their morning with a cup of joe, Watkins has to roll out the cart and the mat, plug in and pre-heat the coffee makers, make his first two cups and “just wait for everybody to line up.”

“I’ve been training other employees because I’m kind of a professional barista now,” Watkins said.

Depending on when he signs up to work, students can also find Watkins behind the counter at the Catty Shack with other marketing students. But for now, Watkins wants to sell as much coffee as he can with his cart.

“We decided to start the coffee cart because not many people knew/were buying coffee from the store because you have to get a coffee ticket from the Snack Shack,” Watkins said. “By moving down to the foyer, it’s more in people’s faces and they are more inclined to buy coffee.”

Watkins’ methodology has paid off, seeing as junior Ally Nguyen finds herself grabbing coffee from the cart at least three times a week.

“I love that it’s convenient and accessible in the mornings,” Nguyen said. “Especially because I get to school kind of late. Also, Brady Watkins is such a positive energy in the morning.” 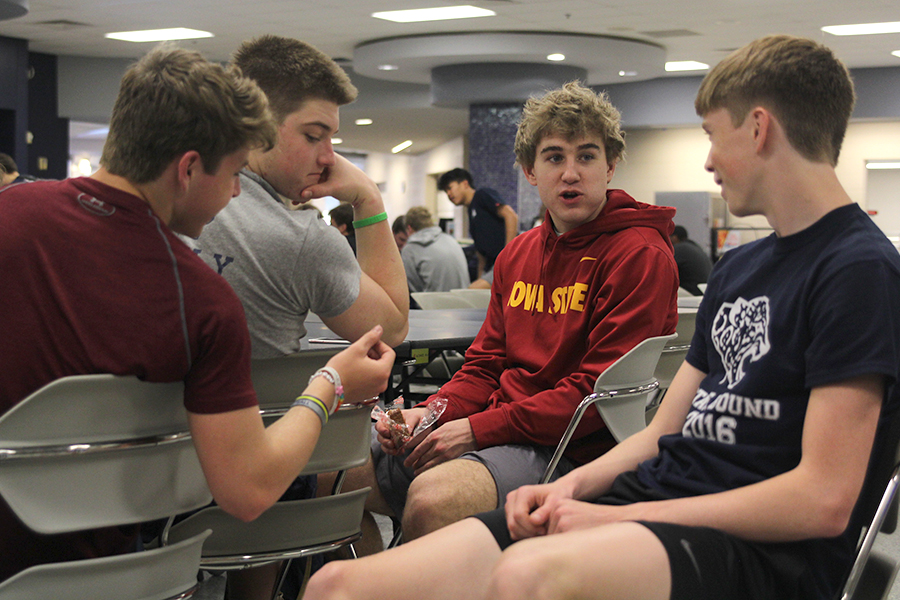 Food and friends draw group of boys to cafeteria before school

Mornings, many students can find a group of 20 to 25 boys huddled at the end of the table in the middle of the commons.

On the tables are just about everything imaginable: binders, muffins, innumerable water and juice bottles, milk cartons, even the heads of sleepy students. In the mornings before school, junior Jake Ashford finds himself with his friends at this table.

At the beginning of the year, Ashford spent his time before school in the locker banks. Whenever he would grab breakfast from the Snack Shack, Ashford would see his friends all eating together and decided to eat with them.

Compared to other places in the school, Ashford prefers the commons.

“It just seems more open and easier to talk around,” Ashford said. “We also have food, so that’s a plus.”

Between studying, grabbing a bite to eat and good conversations, Ashford enjoys his time spent before school. 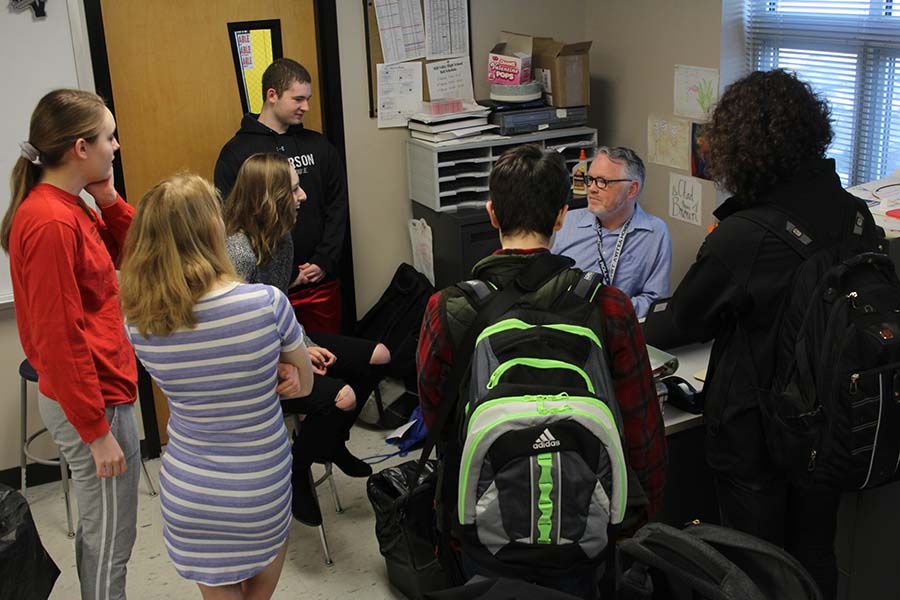 Crowded around science teacher Chad Brown's desk on Tuesday, April 10, students utilize their free time before school to hang out together. "All my friends like to hang out in there in the morning," senior Ashley Ebner said. "We pretty much are all in Science Olympiad, so it's another chance for us to all just chill and get ready for the day."

Laughter erupts from the students clustered around science teacher Chad Brown’s desk on the morning of Wednesday, April 11. Whether they’re talking about Science Olympiad state results or anything else, every face in the room is bright with glee. Before school, Brown’s room is a mixture of Science Olympiad team members, who want to hang out with their coach and fellow teammates, and physics students alike looking for a

Sophomore Shaina Isaacsen, a self-proclaimed ‘honorary member’ of Science Olympiad, started spending her time in Brown’s room in the morning at the beginning of this year.

“[The atmosphere in Brown’s room is] pretty happy,” Isaacsen said. “We’re just hanging out, talking about our days.”

Isaacsen says her favorite part about hanging out in Brown’s room is not only Brown himself, but also the time she gets to spend with her peers before her day begins.

“All of my friends are here,” Isaacsen said. “It’s a nice little secluded area.”