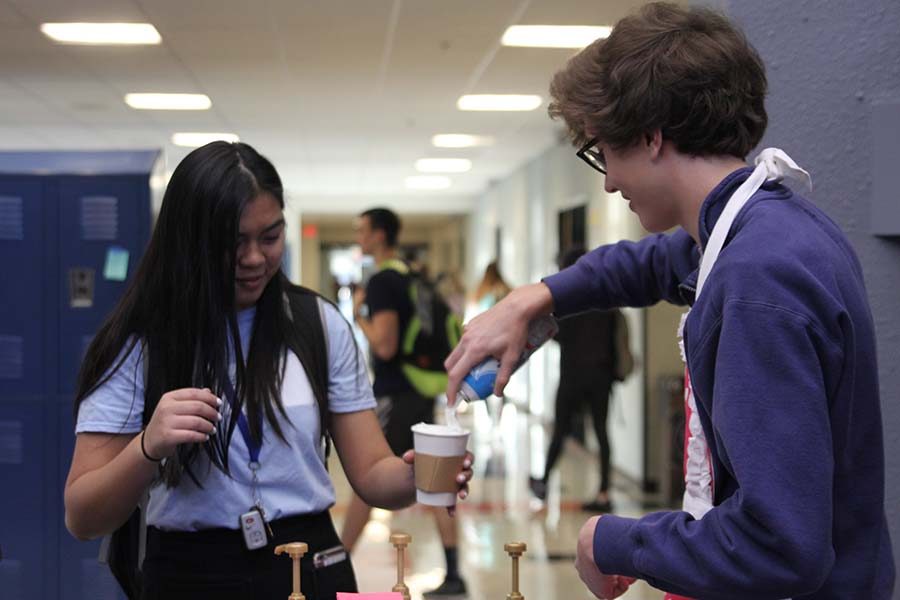 In the main foyer before class on Friday, April 13, senior Brady Watkins works for the Catty Shack and squirts whipped cream on junior Ally Nguyen’s coffee. “I like using the whipped cream to express my emotional, artistic abilities,” Watkins said.

“Do you want whipped cream on top?” senior Brady Watkins asks the student standing in front of his coffee cart on the morning of Thursday, April 19.

Not only does Watkins have a can of Redi Whip prepared, he also has caramel, peppermint and french vanilla syrups available for customers to pump into their coffee. For just $1.50 before school, students can grab hot chocolate or coffee from his cart beside the main staircase.

Every day since its start, which Watkins says was only a couple weeks ago, Watkins has spent his mornings selling coffee as a part of Catty Shack. Before anybody can jump start their morning with a cup of joe, Watkins has to roll out the cart and the mat, plug in and pre-heat the coffee makers, make his first two cups and “just wait for everybody to line up.”

“I’ve been training other employees because I’m kind of a professional barista now,” Watkins said.

Depending on when he signs up to work, students can also find Watkins behind the counter at the Catty Shack with other marketing students. But for now, Watkins wants to sell as much coffee as he can with his cart.

“We decided to start the coffee cart because not many people knew/were buying coffee from the store because you have to get a coffee ticket from the Snack Shack,” Watkins said. “By moving down to the foyer, it’s more in people’s faces and they are more inclined to buy coffee.”

Watkins’ methodology has paid off, seeing as junior Ally Nguyen finds herself grabbing coffee from the cart at least three times a week.

“I love that it’s convenient and accessible in the mornings,” Nguyen said. “Especially because I get to school kind of late. Also, Brady Watkins is such a positive energy in the morning.”