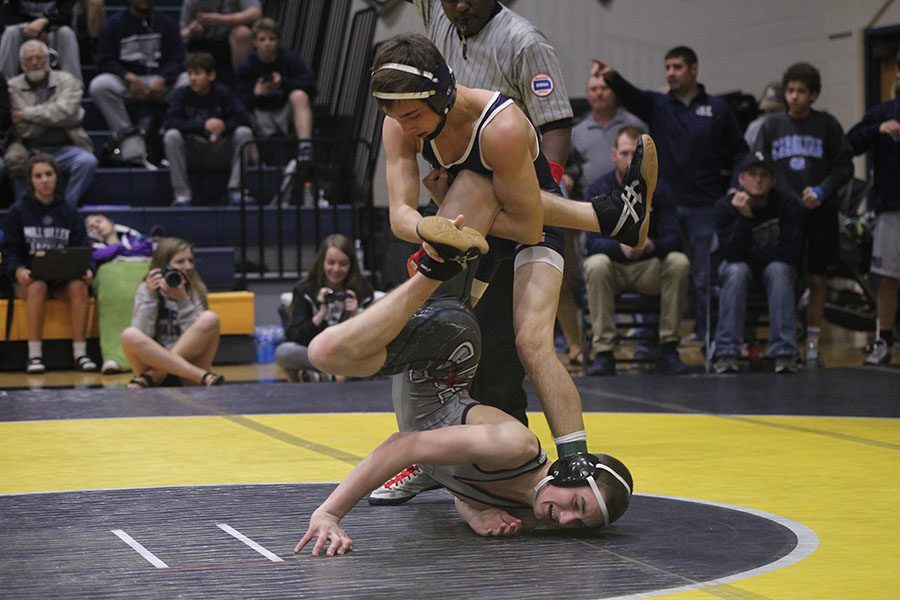 Senior Dylan Gowin holds his opponent by the leg.

Head coach Travis Keal believes that his team needs be steadily improving at this point in the season.

“This time of year, we have to be moving in the right direction with our technique, and tactically,” Keal said. “It’s our goal to make sure we don’t go backwards and keep going forward. We need to do what we do, but better.”

The final matches for the first place finishers were the most important of the tournament, according to Keal.

“They all wrestled pretty hard in the finals; we got some pins. That’s what we do, we separate ourselves from our opponents in the finals,” Keal said.

Senior Dylan Gowin knew this tournament would be an opportunity to improve before the regional and state tournaments.

“I just wanted to score a lot and put points on the board to help the have a chance to win. My goals for this tournament were to win and fix and adjust things for regionals,” Gowin said.

According to Gowin, injuries have sidelined some wrestlers, which made placing first difficult.

“We have three wrestlers out right now, so we knew we weren’t going to be at our best. We are all expecting to beat [BVSW] next week at regionals,” said Gowin.

The next wrestling meet is the regional tournament on Feb. 7 and Feb. 8 at Leavenworth.