The team lost in two sets to SMNW Saturday, Oct. 26 and will not be advancing to state 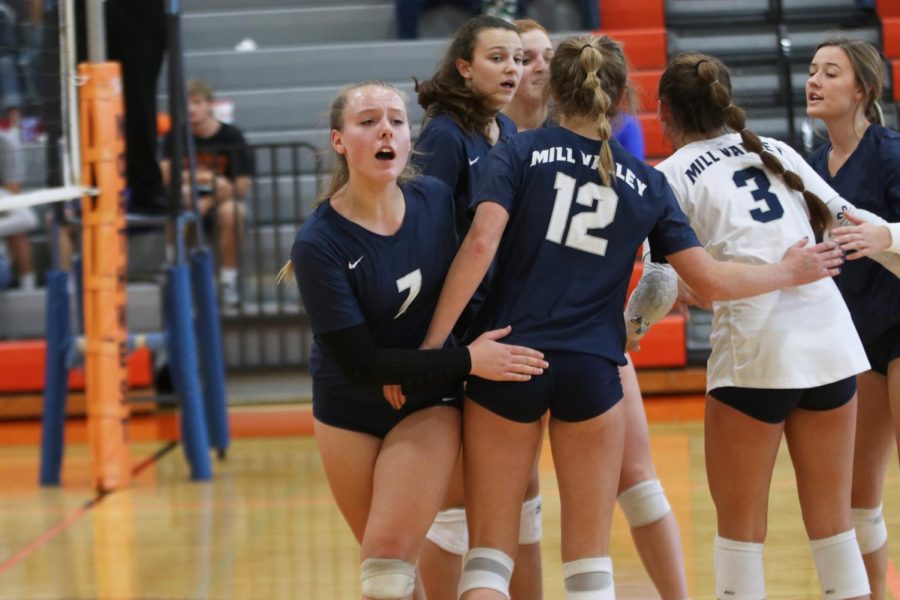 Emerging from the huddle, sophomore Sydney Fiatte yells back to the sideline during the Jags’ first set against Olathe Northwest Saturday, Oct. 26.

The volleyball team fell to Shawnee Mission Northwest at substate Saturday, Oct. 26, so they will not advance to the state tournament.The team lost the first set 25-18 and lost the second 25-16.

According to junior Molly Carr, the team was faced with challenges before play even started.

“Our goal going into substate was to make it to the state tournament, but one of our players [junior Anna Judd] who’s very important to our team had to get surgery a week ago,” Carr said. “We had to change a lot of things in our lineup.”

Although the team lost the first set in their first game against Olathe Northwest 25-20, they pulled through to win the next two sets 25-21 and 25-22. Sophomore Annabelle Manning thought this was team-building.

“It was really hard to come back from that, but it strengthened our team because it gave us confidence that we could do it next time we’re behind,” Manning said.

Junior Anna Judd watched the first game from the bench, due to her surgery the previous week.

“Sitting on the bench watching my team, I feel like we played the first game a little rough,” Judd said. ”We were nervous, but we were able to pull through and win the next two sets.”

The team lost their next game against SMNW in straight sets. Carr thinks the team’s lack of energy in the second game caused their defeat.

“I think during the second game our passing was really good, but with the change of setters our hitters weren’t getting the best ball and we weren’t figuring out ways to score, Carr said. “Also our block wasn’t closing which made it really hard for the passers to get up a ball. Overall, our energy wasn’t as good as the other team so it was like we were defeated before we even started playing.”

“I wish we had more motivation to win for our seniors and Anna since she couldn’t play,” Manning said.

Carr is already thinking of ways to improve the team next year.

“We need to work on finishing our games and having more leadership on our court next year,” Carr said.

Despite their loss, Manning thinks the team had an overall good season.

”We had a really successful season, and we beat a lot of hard teams,” Manning said. “I think all of the girls are really close, so we played really well together all season.”