The team competed against 10 other schools at the tournament held by De Soto on Saturday, Oct. 6 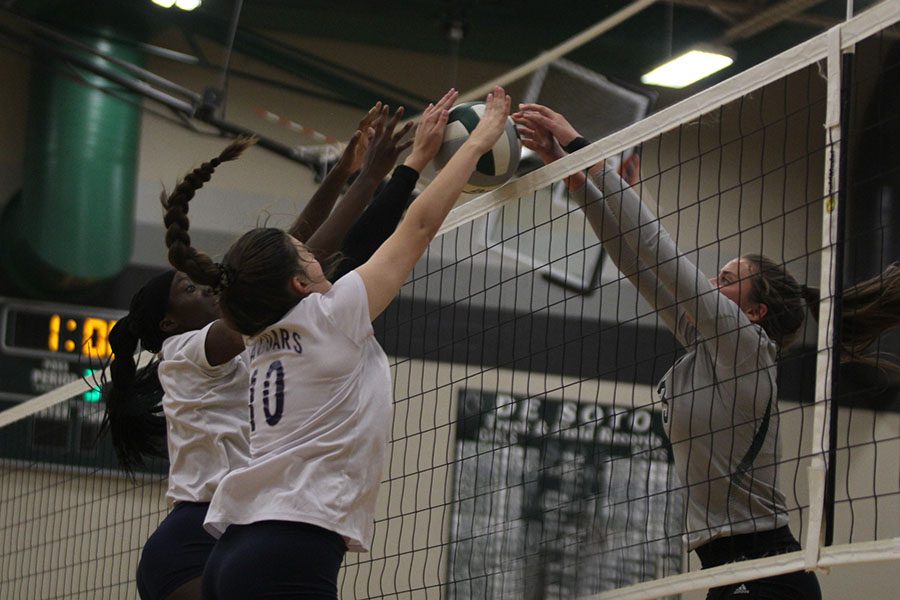 With the ball at the net, junior Faith Archibong and sophomore Molly Carr fight their opponent for possession. "[The team] did well at doing what we needed to do," Carr said. The volleyball team competed in the Spikefest tournament on Saturday, Oct. 6, and placed fourth.

The volleyball team placed fourth after a tumultuous day at the “Spikefest” tournament, hosted by De Soto, on Saturday, Oct 6.

During the tournament, the team saw growth from their last appearance, according to sophomore Molly Carr.

“We have improved a lot,” Carr said. “We definitely had some very big wins, and we are coming together more as a team which is a very good.”

Senior Sydney Pullen said the team “had really good defense including blocking and digs,” which led to their success.

Even though the team had an excellent day, there is still room for growth in the way the team plays, according to Carr.

“We can still improve on our skills, such as being more aggressive with our hitting and our defense,” Carr said. “We also need to increase our mental state of wanting to win all the time even against easy teams, instead of playing down to their level.”

Pullen also added that the team has to change their habit of relaxing in the middle of a set.

“We need to work on playing all the way through the game,” Pullen said. “Sometimes we give up a lead that we have earned because we stop playing at the level we know how to play.”

According to Carr, if the team continues playing like they are now, they will have success later on in the year.

“If we are able to improve these things, I think we will have a very good future in the sub-state tournament and possibly state as well,” Carr said.