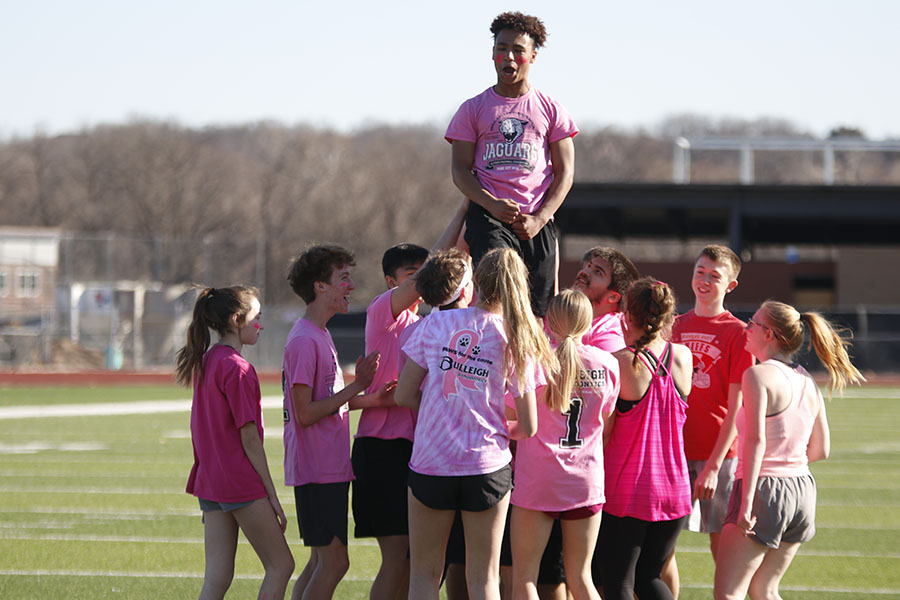 Yelling, freshman Sidney Lockhart is held up by his teammates.

To finish off their first week of practice, the track and field team competed with one another at the Big Cat Classic on Friday, March 6. In the event, senior athletes were randomly assigned to groups and then those seniors drafted the rest of the squad onto their teams. These teams, come time for the competition, compete against each other in five different events.

To start, each team has to come up with a theme and a coordinated team entrance to the field. Each team would be ranked by the coaches in how coordinated they were, how enthusiastic they were and how supportive of each other they were.

After being ranked in their entrances and team themes, the teams would rotate around the field participating in various events.

First was the medicine ball toss, where one holds a 10-pound medicine ball and hurls it back over their head, trying to throw the furthest distance.

After hurling a heavy medicine ball, athletes would attempt the next throwing event: a softball throw. With or without a running start, students would try to throw the softball as far down the football field as possible.

Once done with the throwing events, students would make their way down the turf to a station called ‘bounding’. Bounding is most similar to the track event triple jump; athletes jump from a line, following their landing with another jump from the foot they land on and then once more leaping as far as they can from that position to try to gain as much ground as possible.

After the field events, runners are given their chances to shine in the 60-meter dash and the 300-meter dash. The 60-meter is a dead sprint within a designated area on the track, with speeds topping out at around six to seven seconds.

The 300-meter is an event that combines the element of pure speed and quickness that is required for the 60-meter with endurance. Students line up at the 100-meter line on one end of the track, lined up with the goal line on the field. As soon as the race starts, it is a full sprint all the way around the far end of the field until they are at the same goal line on the opposite side of the track. This taxing event had runners maxing out at just under 40 seconds, requiring them to sprint each 100-meter section in 12 to 13 seconds.

While participating in all of these events, the coaches were tasked with evaluating how supportive and enthusiastic the teams were while participating. They were once again forced to rank the teams and give them points for team reinforcement and support.

After the events were all finished, the coaches and track team managers tallied the number of points earned by each team. This was the sum of the points allocated from their themes, entrances and supportiveness combined with the number of placings in each event by each team. Placings were able to earn team points if students placed in the top 20 of the boys or girls competition.

To reward their hard work, athletes were met with a team dinner at the track and happily left to await the results the next week.

According to head track coach Chris McAfee, the Big Cat Classic event serves to introduce everybody to the track team and get them familiar with what events they can participate in, while also potentially introducing them to new events.

“As coaches, the competition gives us a chance to see if there is somebody who might be a better fit for another event and we can help them adjust that,” McAfee said. “Sometimes we need to switch some people around at the beginning of the season and it helps us do that.”

The event also provides a large opportunity for athletes to get out of the monotony and redundancy of the meetings and formalities of the first few weeks of practice, according to McAfee.

“One purpose of the Big Cat Classic is just to have fun,” McAfee said. “In the first week, there were a lot of meetings and a lot of going over more formal things so it was a nice change of pace for the end of the week.”

The Big Cat Classic also serves to build team culture by introducing new team members to the team and giving them a chance to get to know the events and their team members.

“It helps to get kids to know each other. It develops a little bit of team culture and gives upperclassmen an opportunity to have some leadership,” McAfee said. “It gets the new members of the team involved and makes them feel like they belong on the team. It is more about team culture than about the actual competition.”

Outside of just introducing new members to the team, the Big Cat Classic also serves to give seniors and upperclassmen who have been with the team for multiple years a chance to have a leadership position on the team. McAfee says that it helps to foster teamwork by building the team around central pillars like these upperclassmen.

“When the seniors drafted the team, we put them in charge of having to come up with themes, and we gave them an opportunity to come forward with some leadership,” McAfee said. “It immediately gives them an opportunity to have a voice and for people to look at them for leadership. It gives them a chance to practice meeting new people and getting to know those people.”