Student athletes traveled to national and international competitions over the summer 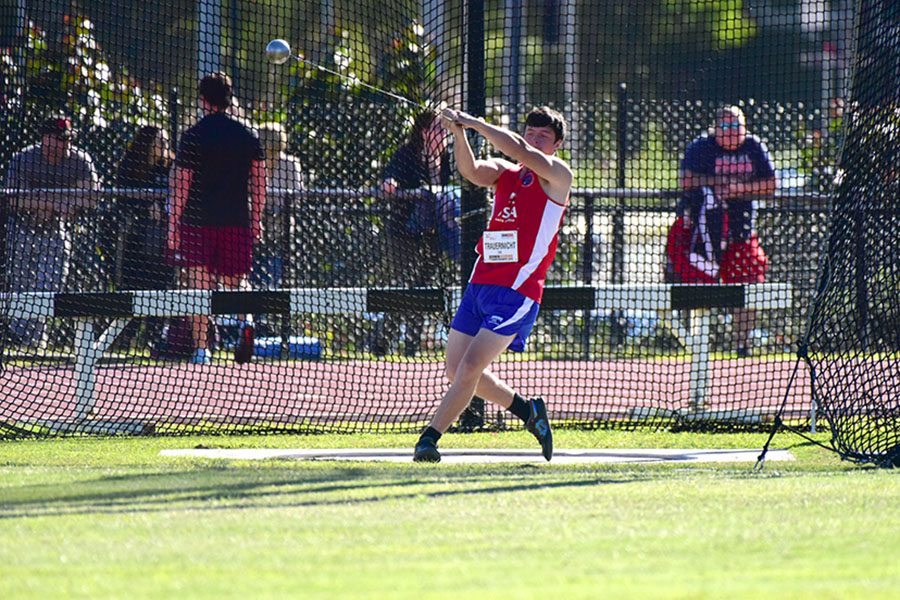 Throwing the hammer, senior Ben Trauernicht competes at the Down Under Sports International Games in Sydney, Australia. Ben finished third in the hammer throw. “I had a great time competing against people from other countries,” Trauernicht said of the competition.

Senior Ben Trauernicht traveled to Australia to compete in the nine-day track and field Down Under Sports International Games this summer between Saturday, July 7 and Monday, July 16. The high-level competition, which has featured Olympic athletes in the past, was a success both competitively and socially for Trauernicht.

“The trip overall couldn’t have been any better,” Trauernicht said. “I had a great time competing against people from other countries.”

Trauernicht competed in three of the four throwing events at the Games. He placed second in the U20 discus throw, third in the U20 hammer throw, and twelfth in the U20 shot put. At a star-studded event where future Olympians compete, Trauernicht’s high placements demonstrate his throwing skills. His coach, Chris Dunback, thinks this international success is due to Trauernicht’s tremendous work ethic.

“Ben works extremely hard,” Dunback said.  “He has learned to focus not on winning, place, and podiums… but on the journey to improve.”

Due to the light workout schedule and enjoyable downtime, Trauernicht loved the trip. Between competitions, Trauernicht visited kangaroo fields, a wildlife sanctuary and the Great Barrier Reef. The enjoyable trips Trauernicht took along Australia’s Gold Coast and elite athletes he met were just as impactful as the competition for him.

“We did a lot more than just compete,” Trauernicht said. “We had free time at the end of most days where we could do whatever we want. I mainly just hung out with my new friends I met there.”

Dunback has worked with Trauernicht for the duration of his high school career. While Ben developed his throwing skills, Dunback has been guiding him along for four years. Dunback admired his decision to travel to Australia for track and field.

“[The trip was] a wonderful opportunity to explore an exciting new place and to also travel with other people who share a similar passion,” said Dunback.

Trauernicht qualified to compete in the event via his success at last season’s track and field state competition. A few Mill Valley athletes were offered the opportunity, but only Trauernicht accepted the trip to Australia. The journey, competition, and experience couldn’t have been better for Trauernicht.

“I’m so grateful I had this opportunity and it just deepened my love for throwing even more,” Trauernicht said.

Every year thousands of teams start the year in the country’s 16’s age bracket. Thirty-six teams make it to Open Division at Nationals by winning a qualifier. Only two teams make it to the championship match, and only one wins.

This year Nationals was from Sunday, July 1 to Wednesday, July 4in Detroit, Michigan. Fox’s team, had practiced multiple times a week to prepare for Nationals. Along with having several practices Emma’s new coach Kelley Bugler would record every game and they would sit down after qualifiers and review what they struggled on as a team.

“Recording games is a very important tool for the girls to review their technique, timing and tendencies throughout matches,” Bugler said. “ It’s not what we rely on most, but it’s an integral piece to the entire training process. As coaches it really helps us break down what we might miss when we watch from the sideline.”

The teams versed on each day depended on each volleyball teams seating. After playing very well throughout each qualifier game attended, MAVS 16-1 was seeded sixth. This lead to them to face tough competition throughout Nationals.

Fox believes that the team had a better chance of winning Nationals this year since they placed second at the tournament last year.

“As a team we all had a more optimistic view on winning Nationals this year and thought we had a decent chance of winning,” Fox said.

“To this day, [winning] still kind of feels weird,” Fox said. “It’s was just insane in that moment of knowing we had won. I was kind of in shock and didn’t really know what to do.

After winning Nationals this past year, Fox is hopeful that her team will win again this upcoming year.

“Our whole entire team got asked back and so we’re all going to be playing with eachother again,” Fox said. “I think I can speak for my team when I say we are more than willing to try and make it to Nationals and win the championship once again.”