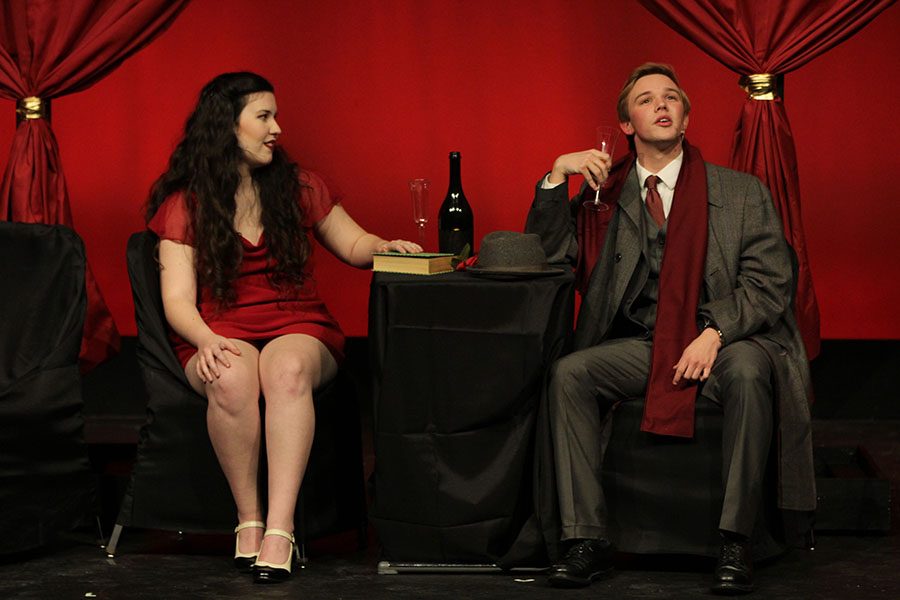 During a dress rehearsal on Tuesday, Jan. 30, as senior Lauryn Hurley awaits for "Dear Friend" to arrive, senior Tyler Orbin sits down and has a drink with her.

For the first time in school history, the drama and theatre department has put together a single-cast, thespian-exclusive production of the musical comedy “She Loves Me” directed, choreographed and put together entirely by a group of senior members of the school’s thespian troupe. The show runs from Thursday, Feb. 1 to Saturday, Feb. 3

In order to become a thespian — a member of the international honors society for drama and theatre students — students must participate in two theatre productions through the school as well as work on the set or technical crew. After putting in a cumulative 100 hours of volunteer work on at least two shows, a student is eligible to join the thespian honor society.

Senior thespian president Lauryn Hurley, who has undertaken the role of vocal director, introduced the idea of a thespian-exclusive show to give thespian students more chances to perform.

“We have a great theatre department, and we wanted to facilitate more performance opportunities for ourselves,” Hurley said. “So, we talked to [drama teacher Jon] Copeland and brought up the possibility of doing a thespian show.”

Besides the unique aspects of leadership and the show being single-cast, the school’s production of “She Loves Me” will also be submitted to the Blue Star Awards hosted by Starlight Theatres. Blue Star is structured similarly to the Tony or Oscar Awards, with numerous opportunities to gain achievements. “She Loves Me” is the first show to be submitted in eight years; the school has not submitted double-cast shows in order to avoid choosing one cast over the other.

In order to determine whether or not the show will receive any Blue Star awards, Starlight Theatre sends experienced theatre personnel to adjudicate the show. At the end of March, nominations will be released. While the opportunity is new and exciting to many students in the department, Copeland has a different priority for his students.

“My goal for my students in every show is that they learn from the show,” Copeland said. “[I hope] they improve their skills, they improve their confidence … they get the range to develop their range as an actor and they have a chance to experience different types of roles while they’re here.”

And, to get the show off the ground, the thespians have had to develop an array of new skills to take on tasks different from those they may have had in a standard show at the school. For example, the thespians raised funds through the sale of fanny packs similar to those Copeland is frequently seen wearing. The fanny packs were sold for $15 a piece to students, and the money went to building the set, purchasing the rights to the show and creating costumes (coordinated by costume director senior Katie McNaughton).

The fanny packs were also designed with the school’s culture of theatre in mind, according to student director senior Durga Jambunathan.

“Our usual director for the big productions, Jon Copeland, always signs off his emails with ‘Fun, Love and Oreos’. So, we printed a smiley face, a heart and an Oreo on the fanny pack. After that we were able to start selling them,” Jambunathan said. 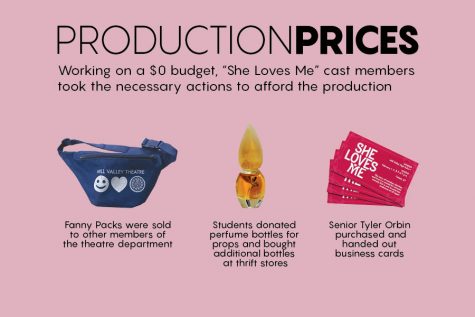 Although the efforts of the student leaders were successful, the lack of adult leaders has led to some difficulty in organizing the show.

“The biggest challenge with this show is that the dynamic is completely different,” Orbin said. “It’s all student-led, we’re all the same age, so it’ s all about working off of one another’s ideas and having a collaborative effort, rather than having a preset vision. So we’ve been building it from the ground up, [which] can cause challenges whenever student leaders have different ideas and we have to … figure out how to incorporate both.”

Due to the show being entirely directed and led by these few senior students, new commitments and responsibilities for the students have arisen unique from those the school has done in the past.

“If you have a part [in the show], you are held responsible for knowing your stuff, and if you’re a student leader, you’re responsible for making sure your aspect is done well and done timely,” Orbin said. “It’s definitely been a challenge— how constricted our time has been -—but I think it’s gone really well.”

Although the show required high amounts of energy and hard work, the experience was highly rewarding to Hurley.

“It’s been a really great and a really unique experience to create something with all my closest friends in the [theatre] department,” Hurley said. “We’ve all put our hearts and souls into this show. We chose it; we made it. This is ours.”