De Soto seniors Kylee Collins and Brent Smith organized a student rally on Friday, July 31 to garnish support for the district to have in-person classes this September. 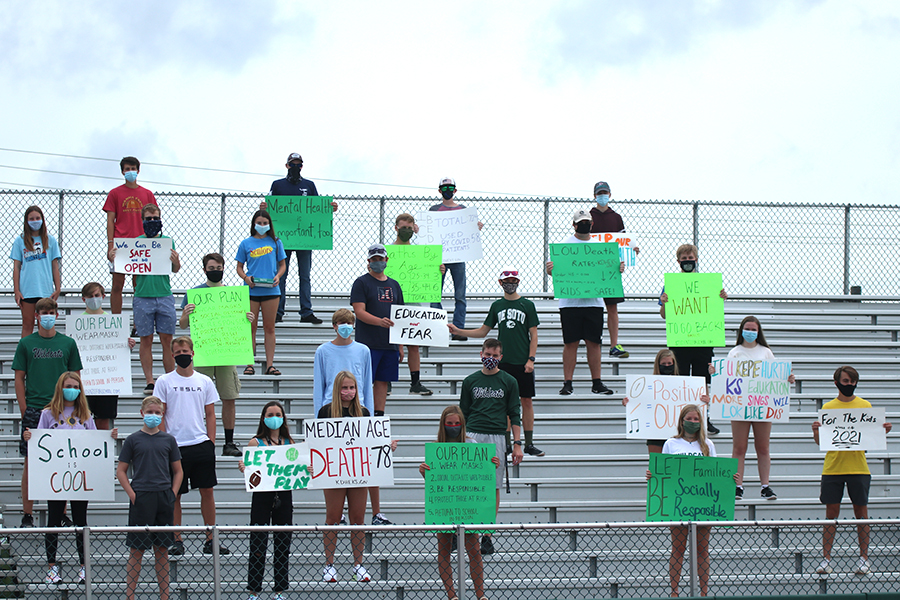 Students from the district hosted a rally on Friday, July 31 to garnish support for school to be hosted in-person this September.

Protesting for fall activities to take place and school to reopen in person, approximately 70 district parents and students gathered on De Soto’s football field over the course of an hour in the afternoon on Friday, July 31.

The rally, organized by De Soto seniors Brent Smith and Kylee Collins, featured students holding signs while socially distanced in the stadium’s bleachers. The signs bore slogans like “Education, not Fear” and “Median Age of Death = 78,” and attendees were also invited to sign a petition in support of the rally’s demands

The rally was planned “very last-minute” according to Collins; Smith said the rapidly organized event was designed to make an impression before the school board meeting Monday, Aug. 3.

According to Smith, the group received 70 petition signatures at the event. The organizers also hope that being featured on a local television news channel will help spread their message.

While most of those gathered at the event were De Soto students and parents, a few Mill Valley students attended as well. One student, junior Charley Strahm, supports an in-person restart to school for the social benefits.

“I just want to go back to school because I need the social aspect, and I really want to go back for sports,” Strahm said. “When I was at home, I wasn’t really focused and didn’t get a lot of work done.”