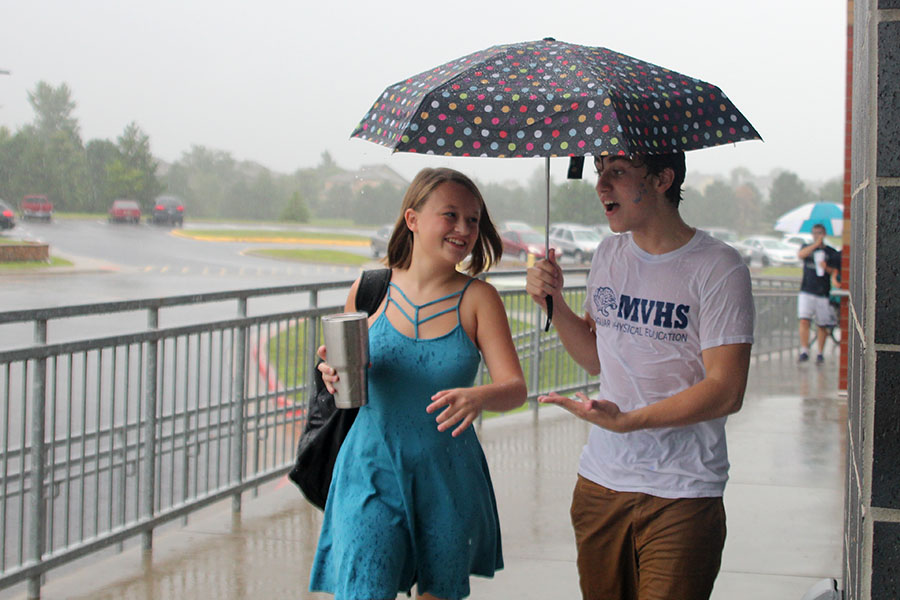 Despite the rain, freshman Avery Hansford laughs as she is escorted into the building at freshman orientation on Wednesday, Aug. 16.

Unlike most students on their first day of school, freshman Chloe Carson felt calm and collected going into orientation and her first cheer performance

“I wasn’t that nervous for [orientation],” Carson said. “I was more excited. It was a little nerve racking to perform because if you mess up you’ll have people on your case for a while, but it went fine.”

Carson feels surprised by how orientation made a big school feel small.

“My sister helped show me where all of my classes are, so I kind of knew where everything was,” Carson said “It’s a lot that different than middle school, and I’m really excited. On the outside, [the school] looks like it’s going to be so big, but when I got in here it’s really not that bad.”

According to senior student body president Bella Hadden, StuCo prepared weeks in advance for the event in order for orientation to go smoothly.

“StuCo planned and executed the pep assembly, made signs and we sorted the students into two groups,” Hadden said. “We had summer meetings for the last couple of weeks. We practiced at a meeting [for the assembly] so we knew everything we were going to say from a script.”

Hadden put the majority of her time and effort into putting together the assembly activities. One of these activities being a rock paper scissors tournament where students competed for a homecoming ticket.

“Instead of being split up by grade levels, everyone on the executive board leads a group, and I was in charge of the pep assembly,” Hadden said. “The rock paper scissors tournament was a really good time and I think they had a lot of fun.”

Throughout her upcoming freshman year, Carson hopes to try new things and expand her social circle.

“[I’m looking forward to] meeting new people and seeing new horizons,” Carson said. “In middle school, you stay with the same friend group, and I don’t like that. Throughout high school I want to have a lot of different friends.”