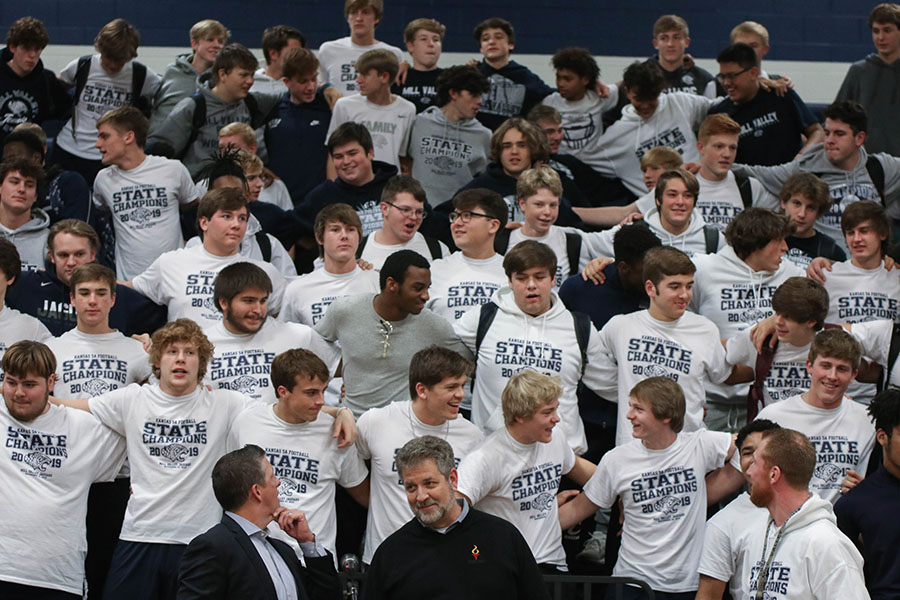 Swaying back and forth, the state champion football team stands with arms around one another to conclude the pep assembly Thursday, Dec. 12.

According to Harwood, the attendance at the assembly reflected community involvement in the program.

“I think that Mill Valley receives tremendous support from the community,” Harwood said. “Part of that is you can see how many parents were here; it’s hard to get out during the day.”

Applebee and the team cherished the pep assembly.

“It was amazing, as always,” Applebee said. “This school is just a great school and a great community. The support we get is just tremendous and we appreciate it all.”

Harwood believes that no matter the students’ opinion on sports, they still encouraged the team.

“You think about the student body support, even during the assembly,” Harwood said. “Not everybody here is a football fan, but they’re respectful and and they’re excited about the success of the team.”

Applebee feels the team chemistry played a major role in the outcome of their season.

“Our team this year was really driven,” Applebee said. “They all set out together and and just really had that ultimate goal as a group that they wanted to accomplish. They did a great job of working together.”

According to Harwood, the team won three titles in five years because of their work ethic and mindset.

“I missed the chance to talk about resilience. There’s been changes the coaching staff [since their 2015 title] and certainly all of the players have turned over in that time,” Harwood said. “It’s about building a culture of success. In every game, they were down at some point, and in every game they came back. That resilience and that commitment to the culture is what builds successful programs.”