Student learns how to deal with mom’s paralysis 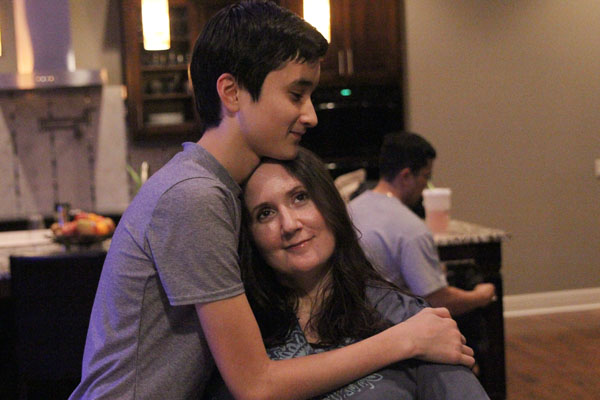 How would you describe your mother’s condition?

Julian: I mean she is paralyzed. I always describe it as she doesn’t have much or any function below her shoulders; she has a little bit [of function] in her arms and she can’t use her hands that much. She is also in a wheelchair.

Serena: I say I’m tetraplegic; the difference is that when you’re paraplegic, that means you do not have any control of two of your limbs, and if you are quadriplegic you do not have control over your four limbs.  However I have a certain amount of control [over my limbs]. I have my shoulders, [but] I don’t have every muscle in my shoulders. And I have biceps and a certain amount of wrists. I have minimal triceps and I don’t have my hands at all. So it is tetraplegic because it doesn’t mean you can’t use all four limbs, but you cannot use them the same as everybody else.

How did you become paralyzed?

How did you feel when you found out your mother was in a car accident?

J: I was crying, there was a lot of pain. I was asking, “Is she going to die?” We did not know a lot of the details [immediately after her car accident]. I mean, she was in extensive surgery. But first, I just wanted to know if she was going to die.

What did you have to give up when your mother became paralyzed?

J: We had to move here, but that wasn’t as big of a change, we just moved across the highway. We also can’t go out as much, we gave up mobility.

What would you like other people to take out of your family’s experience?

J: Besides what I have learned, I would love other people to appreciate what they have. It is kind of a sad point, but you guys don’t appreciate what you have.  Sometimes I just have to take time out of my day to think about what I am thankful for.

What has the experience of your mother becoming paralyzed taught you?

J: Well I had never appreciated cars, but now I am getting a little more appreciation for their abilities. And how without a seat belt [my mother] would have lost her life. I have started to appreciate the car a little more, I’ve learned not to text on the road. Then I have also learned to live. I know everyone lives, but [I have learned how] to live in the moment.

Other than the physical aspects, how has your mother changed since she became paralyzed?

J: I don’t know if she is more reserved, but she is more quiet. She does not really speak her mind as much. But she is there more often; she is [at home] more often than not.  [Before becoming paralyzed] she used to be gone like 12 hours of the day, so we wouldn’t see her. We would only see her late at night or early in the morning.

What do you miss most about your mother before she became paralyzed?

J: I kind of miss just going out and traveling. It was like we would have a three-day weekend and just get up and go, and [my mom] would have us all packed and out the door and we would be gone for the weekend. So I kind of miss that, just [being able] to get up and go. She also can’t do much with school, not that she can’t help me with my homework, but she can’t be an active participant. Like if we go on a field trip, she cannot decide to go anymore. That is something I kind of miss. I miss that fact that she [used] to always be able to be there, even if we were sick, she would be there. So just like her being there and being able to do stuff with her, [is something I miss].

How has your view of your mom changed after she became paralyzed?

J: Well I think it is weird saying you are proud of your mom but I was proud [of her] because she was so positive right after [the accident] and I did not expect that. She is very strong, and patient. She is just kind, strong and optimistic, even if she may not think that. People ask me if she is depressed but I can’t really say yes. I mean there are ups and downs, but she is not depressed because [she] has a good laugh once in a while.

How hard is it to deal with your mom being paralyzed?

J: It is just the way of life, it is not hard to deal with. I just take every day as it comes, it is not really easy, but I don’t really think about it much. I don’t walk home from school and be upset because my mom can’t walk. There are occasions where I will forget and I will have a dream where my mom is walking and then I’ll wake up and [know she can’t]. But it’s nothing new. It is just, you know, a day-to-day thing.

How has you mom becoming paralyzed affected your life?

J: I have just learned to live in the moment and to take each day as it comes. It is a learning experience, but I don’t mind the changes that have happened. I would love if we could not have everyone come in and put her into bed, and that she could come and tuck us in. It is hard because when I’m sick she can’t be near me, she could get pneumonia and [she] would die. So when I’m sick, she is not there. It is the simple things that moms are known for that you get used to [not having], but still miss. So the biggest change is just daily life. It has also affected our family. After the accident, we became a lot closer. But I wouldn’t recommend getting in an accident just to get your family closer together. No one at school notices that I’m different. Maybe I don’t talk to as many people or I’m not as social during certain periods. But it just makes you think more, and it makes you appreciate more.