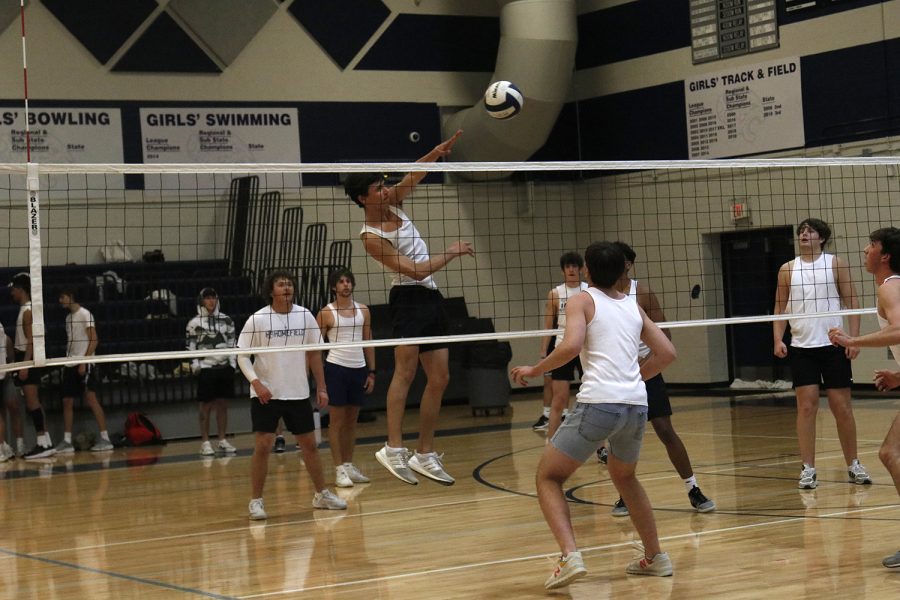 Jumping in the air, senior Brock Olson spikes the ball.

12 teams competed for the overall title of the Buff Puff tournament with the Ball Crushers taking home the win.

“For planning we had to make a signup for anyone that wanted to participate,” Pfeister said. “We also had to make a bracket for all the games and a lot of the volleyball girls were kind and helped with that and made the rules.”

As a part of the winning team, senior Noah Webber shares how his team prepared for the tournament.

“We held one practice to get ready for Buff Puff,” Webber said. “Luckily three of us play club volleyball so we were able to focus on the three who haven’t played during our practice.”

Pfeister reflects on the competitive aspect of the tournament.

“My favorite part was probably seeing the boys compete because they were so serious,” Pfiester said. “The championship game was also really fun to watch because they got so competitive.”

In the end, the Ball Crushers beat Cool Daze 10-6 in their final game of the night.

“It felt great when we won, especially with some of the friendly trash talking that happened during school,” Webber said. “I was actually not totally confident we were going to win, especially after our first two games, but we finally found our groove and basically destroyed the last two teams we played.”

Overall, Buff Puff is hoped to become an annual event, as a replacement for the previous mud volleyball tournaments.

“I feel like for it being the first time ever hosting a buff puff tournament it was really successful and I think a lot of the guys had fun competing and they seemed to get pretty into it,” Pfiester said. “It was a lot of fun.”