Students participate in school's first Clubsgiving on Wednesday, Nov. 15 in the commons 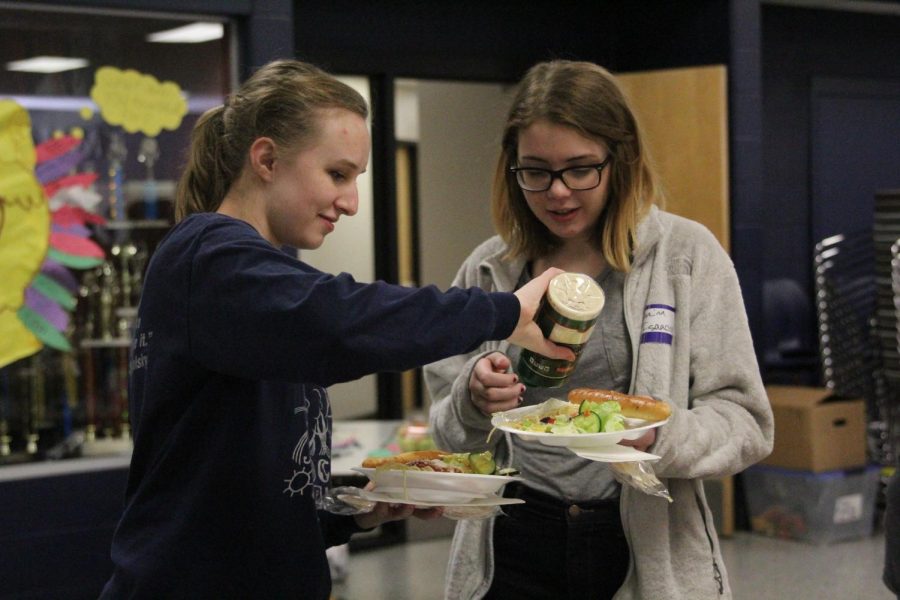 Helping a her friend sophomore Shaina Isaacsen pour cheese onto her pasta, Junior Liz Fraka joins in on the festivities durning the first ever Clubsgiving on Wednesday Nov. 15.

Junior student body secretary Hannah Barnes got the inspiration for the event from a StuCo camp she went to in Emporia, Kansas over the summer. Barnes began planning for the event months ago, while many of her fellow StuCo members helped her orchestrate it.

“We have been talking about planning this since August,” Barnes said. “I thought it would be really fun to incorporate it here because we have a lot of awesome clubs who don’t really get their spotlight.”

According to senior Brady Watkins, who represented DECA, the experience allowed clubs to network with each other while having fun and eating good food.

“I really enjoyed the event. My favorite part was the food, which was really good,” Watkins said. “I think the event really made us work more cohesively together, and I hope we can do another one.”

Because it was the event’s first run, Barnes felt surprised to see such a large number of people attend.

“We thought that not a lot of people would show up so we were really happy with the turnout,” Barnes said. “It went better than what we expected.”

Despite the event’s success, Barnes believes that the assigned seats for dinner made discussion difficult for some.

“I think next year we should try to incorporate a free seating option,” Barnes said. “I think the assigned seats hindered people’s ability to be comfortable to talk.”

For Watkins, the event was a way to meet new friends outside of his social circle.

“I really liked learning about other people’s clubs,” Watkins said. “It was cool getting to know other people from different grades that I wouldn’t normally talk to.”

Barnes said she saw Clubsgiving as an opportunity for people to promote their club’s hard work.

“I think it brought all of the clubs together and allowed all of the sponsors to talk,” Barnes said. “It allowed everyone to showcase what their club is doing.”