Staff editorial: students should accept the consequences of their actions 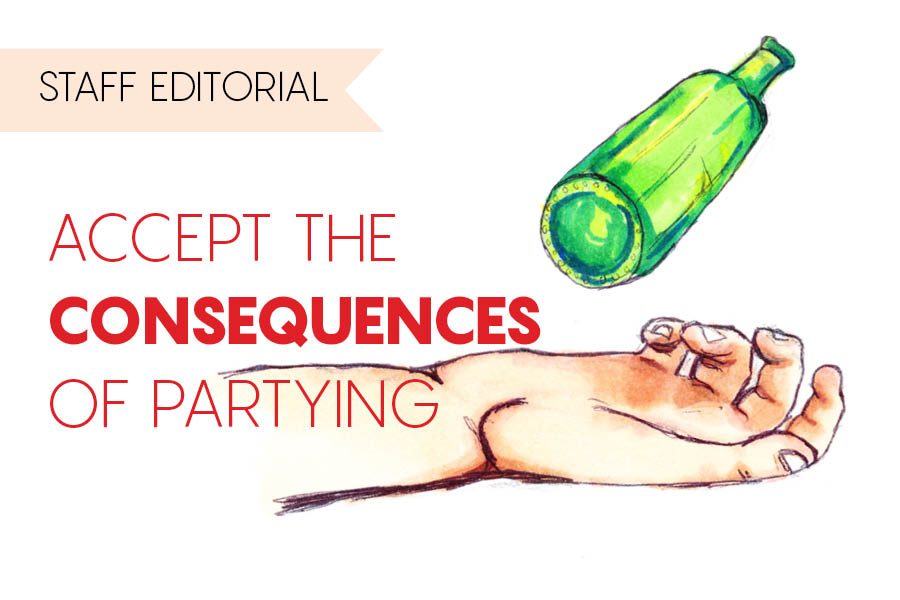 As you walk into your coach’s office, a feeling of disbelief hits you. You know that your position on the team is going to be affected and that you’ve let your teammates down. You feel guilt rising up, and then anger towards law enforcement and the administration rushes through you. But the moment you decided to participate in underage drinking, drug usage or other aspects of party culture, you agreed to face the consequences for your actions. Students who engage in illegal activities should not complain when their actions catch up to them.

Outside of the legal fall-out, a student can lose everything that they have worked towards in high school if they partake in illegal actions. This includes leadership roles and removal from the activities or athletics one participates in. If a student is competing on a team, then not only does the student suffer, but the whole team is impacted by the absence. Those who partake in illegal activities become an example for the rest of their peers to avoid.

When signing up for athletics or some extracurriculars at school, students must sign a contract showing they will represent the school well within its codes of behavior. The aftermath of breaking this contract is just another responsibility to deal with. In a way, partying itself is its own contract; those who take part in illegal activities must face repercussions from administrative action and law enforcement.

The school enforces consequences that affect involvement, but even if students aren’t involved in any activities or athletics at school, the actions of a student still leave a deep impact on those around them. A student’s reputation among their peers can be changed for the worse by partaking in illegal activities. Just think about the fall-out from those around you, including students, teachers and your parents. It is much easier to lose a good reputation than to build one.

No one enjoys the aftermath of party culture. Law enforcement, school administration, parents and those who participate all hate the consequences — both delivering and receiving them. Why choose to participate when it hurts everyone involved? There is much more to lose than to gain.

When you take part in illegal activities such as drinking or doing drugs, you have agreed to accept responsibility for the consequences that land on you. Don’t complain about the repercussions. Instead, make your decisions carefully.