Embracing the competitive challenge, this student dedicates her time to perfecting her skating 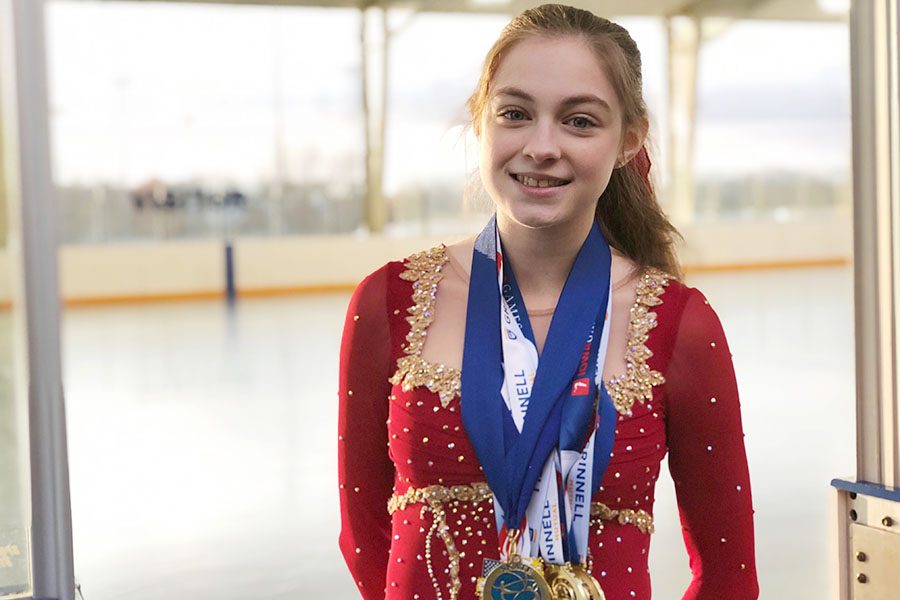 Traveling across the country to collect medals in competitions of her expertise takes a lot of practice — five to six hours a week, to be exact. On Friday, Nov. 11, sophomore Brinna Russell attends figure skating practice at Kansas City Ice Center after school.

Skates glide across ice, it’s 5:30 a.m. and the sun hasn’t even risen yet, but perfecting a move as daunting as the double axel requires determination and perseverance. Sophomore Brinna Russell nails the move, but it’s not quite enough to satisfy her. After all, whenever you’re competing against other skaters, perfection is crucial.

Russell didn’t immediately jump into the world of competitive skating. Her passion started roughly eight years ago when she started skating recreationally. After a couple of years, she discovered her passion for the sport went deeper than just a casual hobby. Private lessons simply seemed like a natural next step.

Russell is strongly committed to her sport, skating five to six times a week for at least an hour each session.

“You’re a little more challenged, and you have to work harder, but it’s worth it in the end.” Russell said.

One of her close friends, sophomore Kylie Overbaugh, has seen the way skating has changed Russell’s life over time.

“I think that it has affected her in a good way,” Overbaugh said. “Although she’s busy more often, I can tell she enjoys it a lot, which is nice to see.”

Russell’s efforts and skills were demonstrated in competitions which qualified her for the State Games of America, a national competition Russell described as a sort of “mini-Olympics,” which will start on Wednesday, July 31.

“We get to march in with our state like the countries get to do with flags, it’s like a little Olympic ceremony,” Russell said. “There’s an Olympic village that the competitors get to go to, and I was lucky enough to be eligible for that.”

A competition of that nature can be full of intense pressure, but Russell welcomes the challenge.

“I’m really looking forward to that, and I’m really going to push myself,” Russell said.