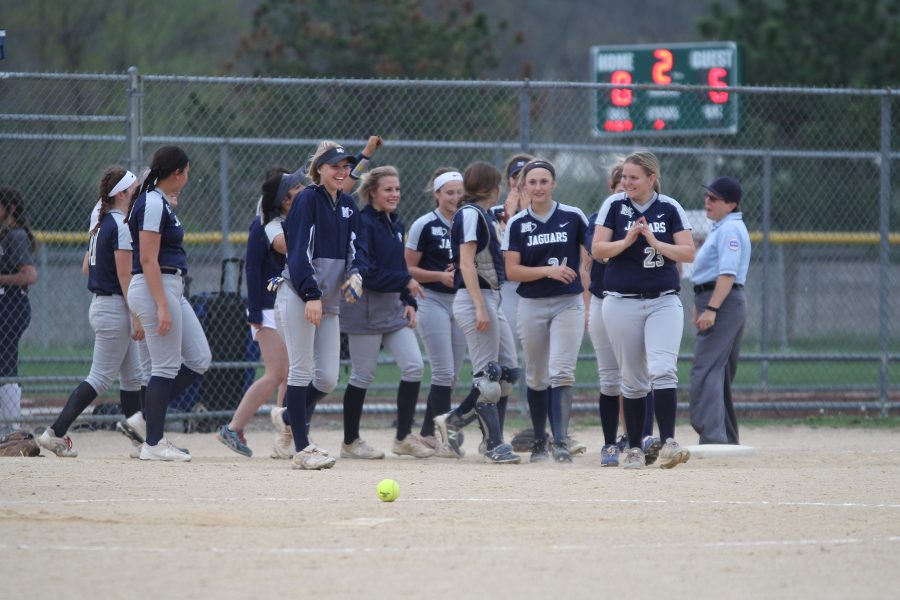 After winning two of their games against Saint James Academy Tuesday, May 1st, the softball team smiles as they walk on the field.

The softball team defeated the St. James Thunder 13-0 and 23-0 in a double header on Tuesday, May 1.

The team’s mindset going into the game was key in getting these wins, according to sophomore Jessica Garcia.

“Starting out, we focused on playing good defense, hitting low and having fun,” Garcia said. “Doing these things throughout both games helped us win.”

Sophomore Lauren Florez pitched the first game, shutting out the Thunder 13-0. Florez wanted to help her team while she was on the mound.

“When I was pitching I was focused on getting the first out and throwing the first pitch strike,” Florez said.

In the top of the second inning of the second game, the Jags rallied together and scored 21 runs. Garcia believed having the whole team contribute helped.

“We put key hits back to back, cheered each other on and it was loud in the dugout,” Garcia said. “All of us contributed to the runs that we put up.”

With a record of 10-4 this season, Florez thinks they’re doing well as a team.

The Jags face the De Soto Wildcats next on Thursday, May 3 at home. Garcia believes the team will prepare for these games like any other game.

“We’re going to practice hard and work hard every day,” Garcia said. “We’ll play it just like any other game. We’ll go out there, try our best and give it our all.”