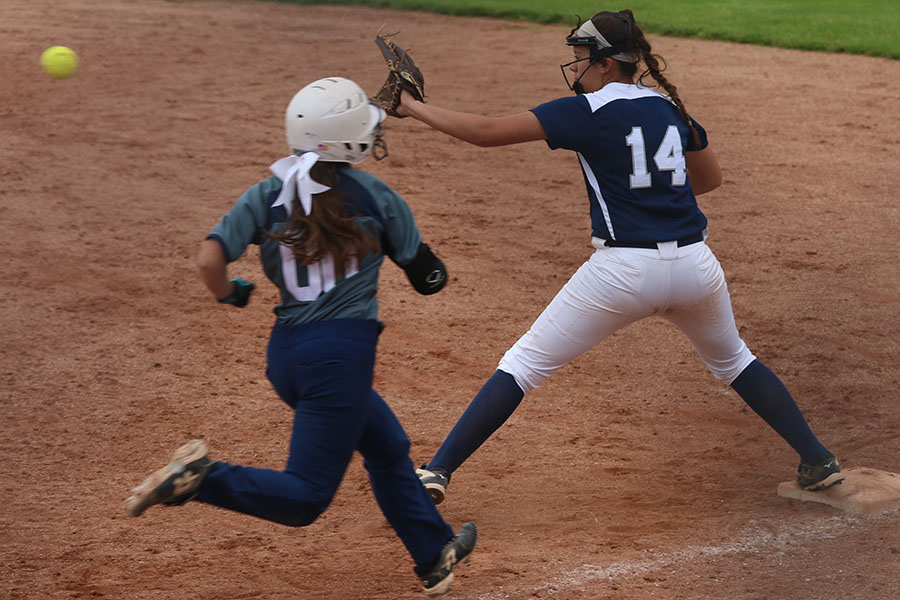 Standing on first base, freshman Lauren Florez looks to catch the ball so she can get an out

In its last matchup of the regular season, the softball team split in a doubleheader against the Blue Valley North Mustangs on Wednesday, May 10.

After a slow beginning with few runs in the first game, the Jags were able to gain some momentum in the last couple innings, which coach Jessica DeWild was sure would translate over into the second game against the Mustangs.

“It took a while [for the girls] to get a feel for the pitcher, so the first couple innings were a little rough,” DeWild said. “But we came back and almost made it, so I’m confident that in the second game, that should carry over.”

Junior Lilly Blecha agreed that the team started off the doubleheader a little sluggish, and thought the team needed to finish strong in the second game in order to win it.

“I think we need to start getting our bats going and just time the pitcher and start hitting sooner because we only started hitting towards the end of the game,” Blecha said.

With ambitions to come out of the gates strong, the team managed to continue the momentum they had garnered at the end of the previous game and pulled out a 14-7 win in the second game.

With this being the last game of the season, junior Sydney Parker believes the team was successful overall.

“I think that this season, we’ve joined the EKL so the caliber of teams that we’ve played has been a lot higher and a lot tougher and I feel like we’ve really competed well,” Parker said.

DeWild also thinks the season went well, and hopes to continue doing well into the offseason.

“[The season] has had ups and downs, but we’re on a pretty good run,” DeWild said. “We should be a force to go into regionals, so hopefully we can pull out a win and make it to state.”

The girls will take on Aquinas and St. James in regionals on Tuesday, May 16 at Aquinas.