Varsity softball kicked off the season with a double win against the Blue Valley West Jaguars on Tuesday, March 27 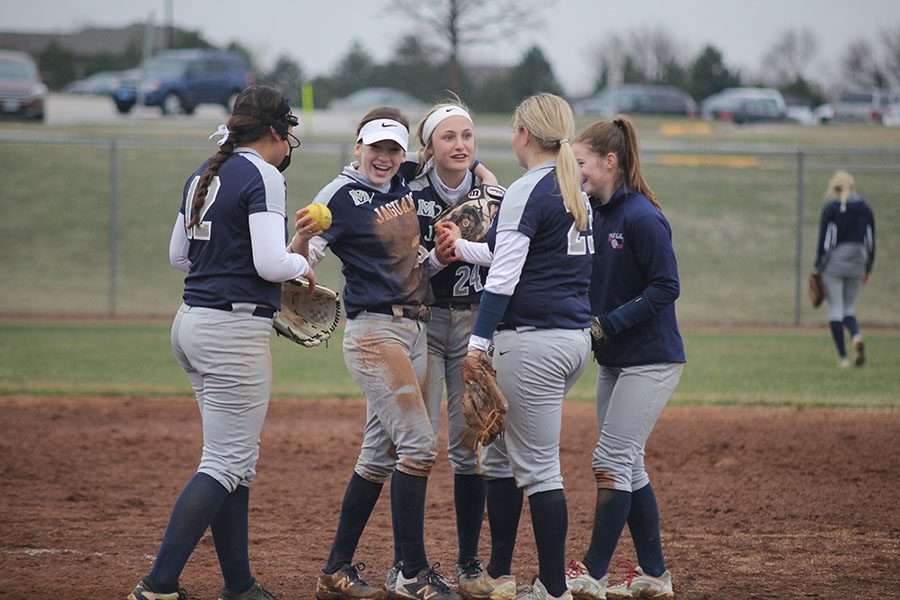 The infield celebrates with each other at their game against the Blue Valley West Jaguars on Tuesday, March 27.

The softball team defeated the BVWest Jaguars 10-3 and 13-2 in a doubleheader on Tuesday, March 27 in their first games of the season.

According to sophomore Jessica Garcia, the players will use each others’ energy and confidence to perform well for the 2018 season.

“As a team, we come together to hype each other up before a game,” Garcia said. “We call each other out when we do something wrong and use our team bond as a way to trust each other for this season.”

Leading up to the start of the season, senior Peyton Moeder said the team practiced hitting and base coverage.

“I think the coaches prepared us well for the season,” Moeder said. “They’ve really encouraged us to work hard at practice and prepared us for any game situation.”

Being well-prepared and fired up didn’t necessarily increase confidence for everyone, however according to sophomore Lauren Florez, the team was faced with the first game jitters.

“Everyone gets nervous before a game,” Florez said. “But, we stayed positive and warmed up which relaxed us before the game started.”

For Garcia,  keeping her mind focused is essential to play well.

“Before a game, my mind is always clear,” Garcia said. “I cancel out all the noise and focus on the game and our opponents.”

Due to the recent weather, the field was in poor condition and the players had to work hard to stay warm.

“I think we struggled the most adapting to the weather and field conditions this game,” Garcia said. “It was difficult to run to the bases because our cleats were stuck with mud.”

According to head coach Jessica Dewild, the team’s defense played well in both games without much pre-game practice.

“The defense as a whole did really well,” Dewild said. “Even though we haven’t gone outside much during practice, we didn’t give up a lot of the runners that were on base and played really well as a team.”

Softball will play next week at BVNW on Monday, April 2 and again at home against BV on Thursday, April 5.