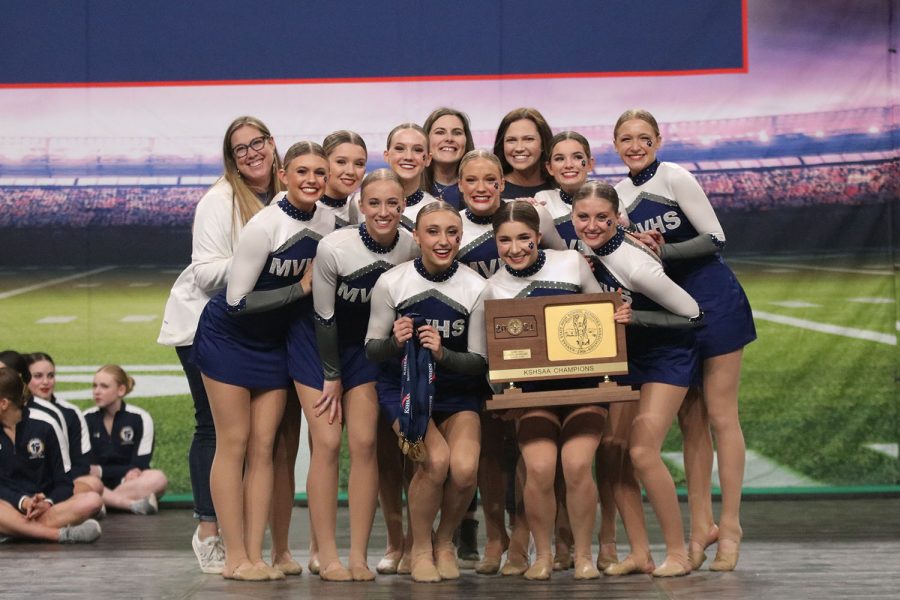 Gathering around the trophy, the Silver Stars celebrate their second state win. Due to COVID-19, the team competed digitally for the state competition last year and were ecstatic to be back in person for their second-year win where they received a final score of 94.23.

The Silver Stars dance team placed first at the 5A State competition at Stormont Vail Events Center Friday, Nov. 19, making this their second state title for the second year in a row.

Senior Anna Brazil felt overjoyed with the results of the competition.

“It felt so incredible to win our second state title as a team,” Brazil said. “We all went into the awards very nervous, and so the feeling of winning was so great.”

Gushing about the competition, senior Ella Lorfing considered the atmosphere to be her favorite part.

“My favorite part of the competition was getting to watch all the other dancers and getting to see all my friends from different schools,” Lorfing said. “We were so excited and proud of all our hard work when they announced we had won.”

According to Brazil, the state competition is divided into three categories: fight song, band dance and performance routine.

“We compete each element of our routine separately in three different categories. Each element is scored in the preliminary round out of 50 points to create a combined score. The six highest combined score teams then get to compete in finals,” Brazil said. “We are judged on each element of the routine with a separate score sheet. Items include execution of movement, choreography, overall impression and more.”

Lorfing felt thankful for her teammates.

“My favorite thing about being a part of the Silver Stars is that we all are so supportive of each other and we all want the same thing,” Lorfing said. “We work so hard and push each other every day to be better and I couldn’t ask for a better group of girls to be by my side for my senior year.”

“I loved how fast-paced the competition was and the competitive atmosphere with all the other high school teams so close,” Brazil said. “After every performance, we would have a few minutes to watch other teams before getting ready for our next performance.”

To read the results of the entire competition, visit the KSHAA website at http://www.kshsaa.org/public/spirit/pdf/2021danceresults.pdf