The Silver Stars performed their jazz and pom routines, which they will also compete in during nationals in Orlando, Florida 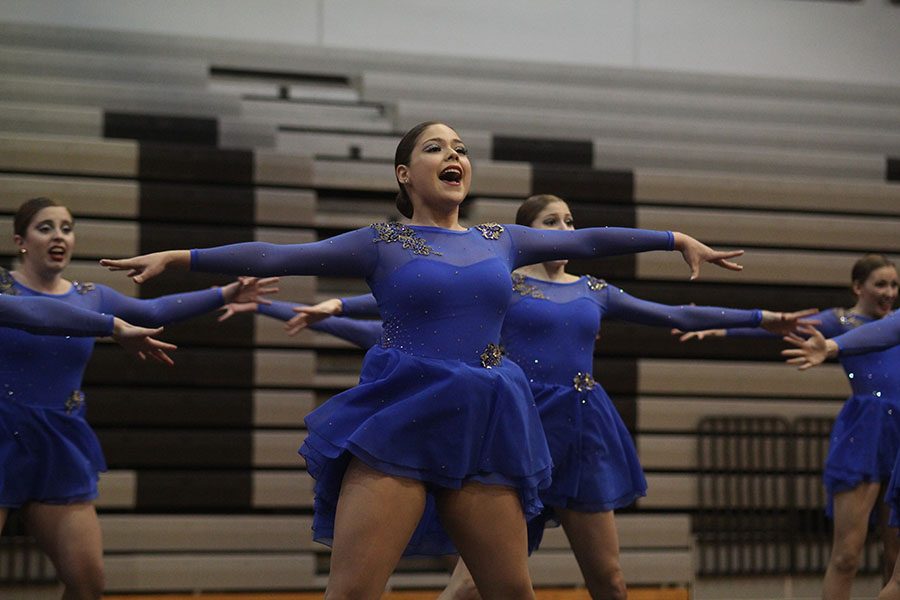 The Silver Stars performed at the National Dance Alliance (NDA) Nationals Showcase at Olathe Northwest on Monday, Feb. 26. The showcase served as a way to send off local dance teams planning on attending the NDA National Championships in Orlando, Florida, which takes place from Friday, March 2 to Sunday, March 4.

“My favorite part was after our pom dance and we knew that we killed it and we did really well,” Barge said. “When we went back into the dressing room and changed we had all this energy between everyone. We knew we were going to do really well going into our second dance.”

Performing at the showcase created a stress-free environment for Barge and the rest of the team compared to a typical competition.

“The showcase was a lot of fun because it showed off all of our hard work and it was more relaxed because we didn’t have the pressure of competing against the other teams,” Barge said.

With many parents and close friends in attendance, senior Abby Sutton and the team received more encouragement than normal.

“We were surrounded by our friends and family and the people we dance with outside of school who we have known almost our whole lives,” Sutton said. “Having all of their support and all of the parents’ support was a lot different.”

“We compete against a lot of the teams here and it was really good to see them because they are our competition at nationals so it was good to see who we were against,” Barge said.

In preparation for both the showcase and nationals, Sutton and her teammates put in extra practice time, even rehearsing on the recent snow days.

“We have been practicing a lot,” Sutton said. “On the snow days we still had practice even though not everybody could make it, obviously.”

By working to improve throughout the season, Barge and the team felt prepared to compete at nationals.

“We feel really confident,” Barge said. “We’ve made a lot of progress throughout the year and that really showed last night. We are really excited to go out there and show everyone.”