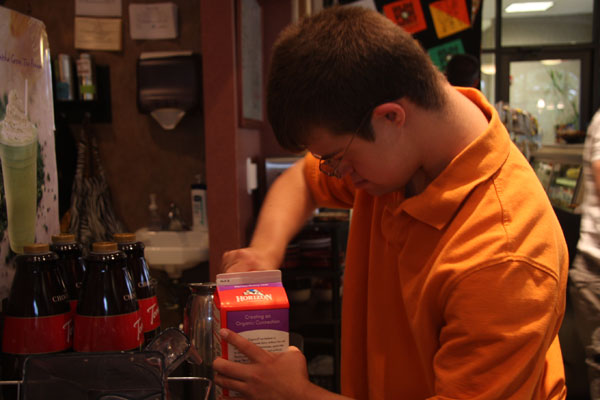 Cleaning, refilling, and stocking: that’s how senior Tyler Dubas spends his Tuesday and Thursday mornings at the Country Club Café.

Dubas started his job in December 2011 and continued to work through the summer.

“I want to continue working at the Country Club Café at least through high school,” Dubas said.

Because Dubas has a learning disability, the job gives him skills that will help him later in life.

“It helps him learn basic janitorial skills, and it’s a repetitive schedule which allows him to perfect each skill,” special education teacher Rachl Rada said.

Dubas’ main responsibilities include cleaning the tables, counters and dishes, as well as refilling the napkins and paper towels. Along with gaining work experience, there are other perks to his job.

“After I am done cleaning I get hot chocolate, which is my favorite part,” Dubas said.

Along with his teachers, Dubas’ parents also want him to be successful.

“His parents were very involved on getting him a job so he can be a productive citizen,” Rada said.

All the special education students, like Dubas, also help out around the school. Based on their function level, they recycle papers, stock the cafeteria and empty trash. In the spring, they get to use these skills for the Job Olympics.

Rada said that the special education program gets the kids involved in the work force so they can be a successful part of society.