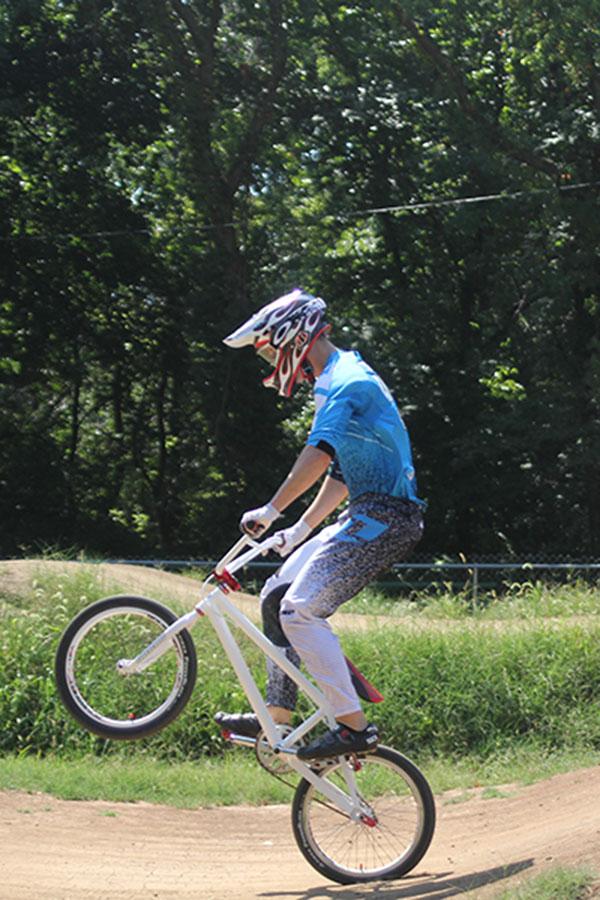 Senior Josh Thomason pops a wheelie while practicing riding his BMX bike on Sunday, Sept. 8 in Topeka. He is preparing to compete in the Grand Nationals.

Senior Josh Thomason races down the track. It’s his last race of the day, the championship. He’s currently in third place, approaching the last straightaway. “How can I pass them?” he thinks to himself. Not even seconds later, he speeds past the other two riders. He takes the lead and wins the 2007 Race of Champions.

Thomason has been competing in bicycle motorcross, or BMX, since 2006. Thomason explained the sport and its differences between similar sports.

“[BMX is] bicycle motorcross, basically supercross but you pedal instead of having a motor,” Thomason said. “You use your legs for the motor and it’s a sprint type race, it’s not laps. Most tracks have three turns and four straights.”

“In all of my competitions I’ve stayed in the top three,” Thomason said. “I’ve always qualified for all the other races and I’ve never not placed in a big race.”

Thomason will compete in the Grand Nationals competition in November in Tulsa, Okla., which will establish his national ranking.

His success does not come without hard work, as he spends a lot of time practicing.

“I practice about once a week,” Thomason said. “I just focus on parts of the track. I try to work on [the first straight] as much as I can and then when I feel comfortable with that, I move onto the second straight, and so on.”

BMX is very time-consuming for Thomason, and the commitment sometimes proves to be a problem for him.

“It occupies most of my weekends and weeknights. I’m at the track eight hours a day on the weekends,” Thomason said. “That’s the toughest thing to work with, just getting out to the track [and] having enough time to practice.”

However, Thomason said that the independence of the sport makes it easier to practice. For this reason, he enjoys the sport more than others.

“It’s a lot more individual; you don’t really have to rely on your teammates. I like that about it,” Thomason said. “You can set your own practice dates. If you were on the football team, you’d have to go to your [scheduled] practices.”

Overall, he finds the sport to be very rewarding.

Thomason hopes to be able to continue the sport in the future.

“I hope I can continue to race when I’m older,” Thomason said. “I would like to eventually compete in the professional stage.”

For now, Thomason dedicates his time to preparing for the Grand Nationals, which are a mere two months away.

“I’ve been practicing a lot for the competition,” Thomason said. “I hope to do well.”