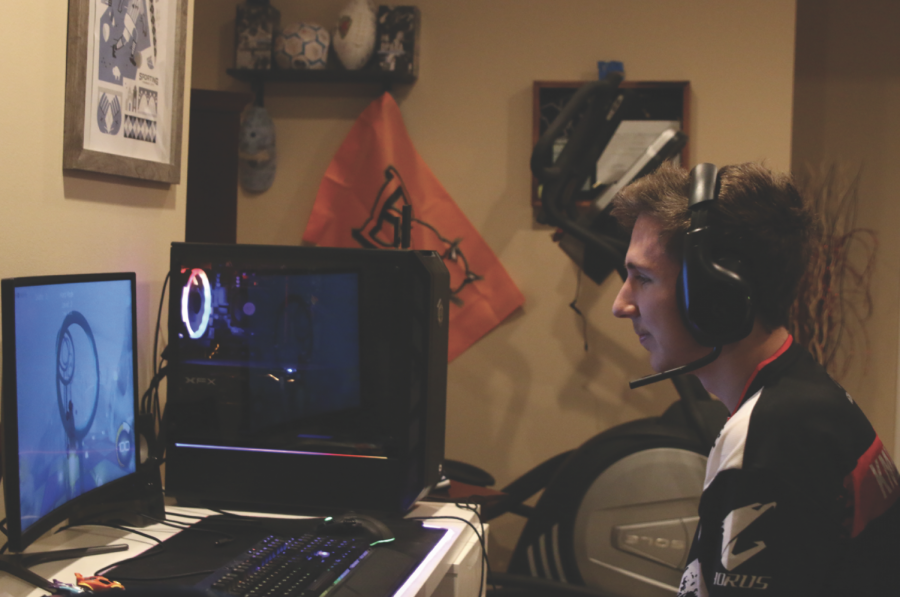 When John Scarpa’s friend tried to sell him on Rocket League in seventh grade, he couldn’t have been less interested in the novel soccer-with-cars video game. Five years later, Scarpa’s earned more from Rocket League than he ever imagined: a community of online friends and teammates, a host of unforgettable experiences, and a scholarship to Baker University.

Scarpa always wanted to be a part of the esports community. Though he describes himself as a typically quiet and shy person, he always connected with others online — Scarpa has a group of friends from across the country who he met on Xbox 11 years ago — and felt like he could fit in.

However, despite playing a variety of shooters like Rainbow Six Siege throughout elementary and middle school, he couldn’t find a game he truly clicked with. Then came Rocket League.

“When I began following the Rocket League esport around freshman year, I decided to stop playing casually,” Scarpa said. “I always have had the drive to reach the top, but I just never found the right game. Then, I began training in Rocket League.”

Scarpa knew he couldn’t grind alone, so he began to seek out communities of like-minded competitive players.

“I didn’t think it would be easy to climb the ranks by myself, so I started finding groups where I could keep learning along with ranking up,” Scarpa said. “Everyone you meet cares about their rank, and they’re all differently skilled. I’ve even seen 12 to 15 year olds be at the higher ranks, which is pretty crazy.”

As Scarpa continued to improve, he also became more immersed in the esports community surrounding the game. For Scarpa, following the esport is one of the highlights of Rocket League.

“The pros and analysts are exhilarating to watch, and the game is very simple to understand,” Scarpa said.

Scarpa’s most memorable moment as a Rocket League fan was attending the Season 7 World Championships in New Jersey. He watched Renault Vitality win their first-ever RLCS title, helped set the world record for the longest continuous wave (28 minutes!) and called the event “an experience I will never forget.”

Ultimately, Scarpa credits Rocket League and its community for his development as a person.

“Online gaming helps me be more confident and goal-oriented,” Scarpa said. “Watching Rocket League pro players and analysts has shaped me to believe that the harder you work, the better you become. Also, through new skills and mechanics, the game has taught me to never stop learning.”

Scarpa suggests that anyone with the opportunity to try the game that altered his life should take advantage of the chance.

“I recommend everyone should try the game,” Scarpa said. “It has opened doors for me, from my education to teaching me to be myself. It’s helped me find friends with similar interests and meet new people.”