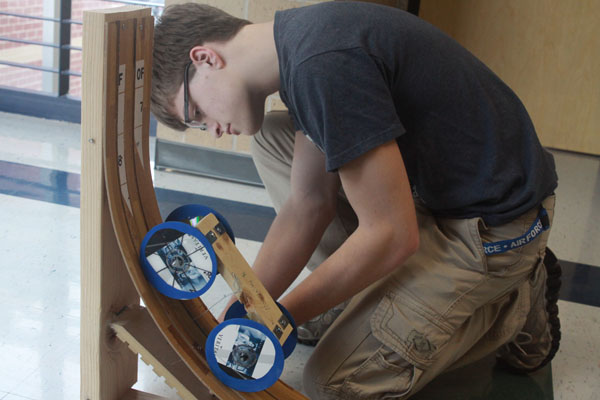 Junior Tyler Hinnen test runs his gravity vehicle during a Science Olympiad meeting on Thursday, Feb. 8. “You have a car powered entirely by gravity,” Hinnen said. “It is supposed to go a preset distance that [the judges] tell you, which is somewhere between five to ten meters.” Hinnen says that the vehicle runs fairly well.

The Science Olympiad team attended the Northland Invitational at Staley High School on Saturday, Feb. 2, but did not place in the top five.

Junior Tyler Hinnen was disappointed with the results.

“[Our result] wasn’t as good as it should have been, specifically for robot arm,” Hinnen said. “We didn’t practice much the week before and didn’t operate it properly.”

Science Olympiad sponsor Jennifer Aytes said that after this tournament, the team’s main goal is to focus on future competitions.

“Although I would have liked to see us place higher at the invitational, I hope the team will stay focused for regionals in three weeks,” Aytes said.