Robotics team wins half of matches at world championship in Houston, Texas

The team competed with a three-team alliance, and won five out of their ten matches 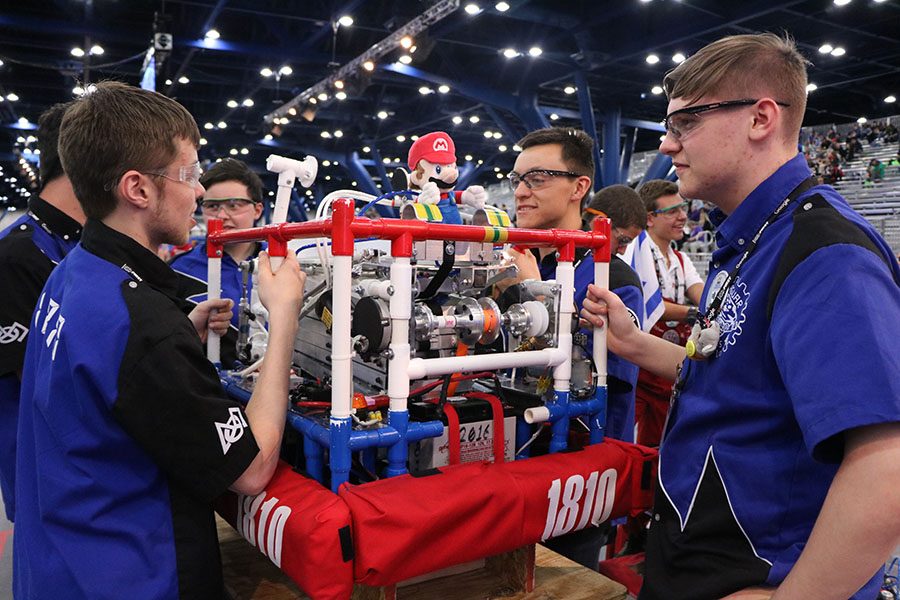 Getting ready for their next match, sophomore Jacob Howe and seniors Cody Moose and Zack Diebert from DHS, wait until the field is ready for setup.

The robotics team competed at the 2018 VEX Robotics Championship in Houston, Texas on April 18-21. The team won five matches out of the ten they competed in, and this is the second time the team has attended the world competition in the last two years.

The team made it to worlds on a last minute technicality, a rule that states if a regional winner has already clinched a spot at worlds, they must give their ticket up to a second place winner. When the team placed second at the Kansas City regional competition, this exact scenario took place.

According to head coach Mary Beth Mattingly, the team was excited for the opportunity, no matter the circumstances that allowed them to go.

While the technicality was important, freshman Emily Hertel also believes that there were more components that led to a spot at the world championship.

“A lot of communication was needed on our end with the other teams to make sure our strategies were in line,” Hertel said. “We got picked by the number one alliance, which led us to getting really far in the final matches.”

In the time between regionals and the world championship, the students could only sit and wait as their robot was already in Houston waiting on them. According to Mattingly, however, the team still took steps to prepare for the competition.

“[We] prepared more in terms of marketing, like making more buttons for giveaways,” Mattingly said. “They would talk about strategy, [and] the programmers could take a look at the programming [to] see if they could tweak it.”

This is Hertel’s first year on robotics, and according to her, attending worlds heightened her experience on the team.

“I think since it’s my freshman year, it was really exciting to see a robot I worked on at regionals, and it was so exciting to see us go to worlds,” Hertel said. “It was a lot of tears the whole build season, but it’s just the thing that I live for.”

Not only does this give the team the opportunity to go to the biggest competition in high school robotics, according to Mattingly, it also gives each teammate a chance to strengthen their relationships with each other.

“I think an event like this gives the team more internal bonding because this is a chance for everybody to be together all the time, and [the students are] sharing an experience,” Mattingly said.

Hertel believes one lesson she will take away from the competition is to value the chance she received, and to be grateful for the opportunity.

“[I learned to] definitely [not] take anything for granted,” Hertel said. “It was a once in a lifetime experience, and many teams won’t be able to see that in their first robotics experience. I [value] just being able to take in everything and just being in the moment.”