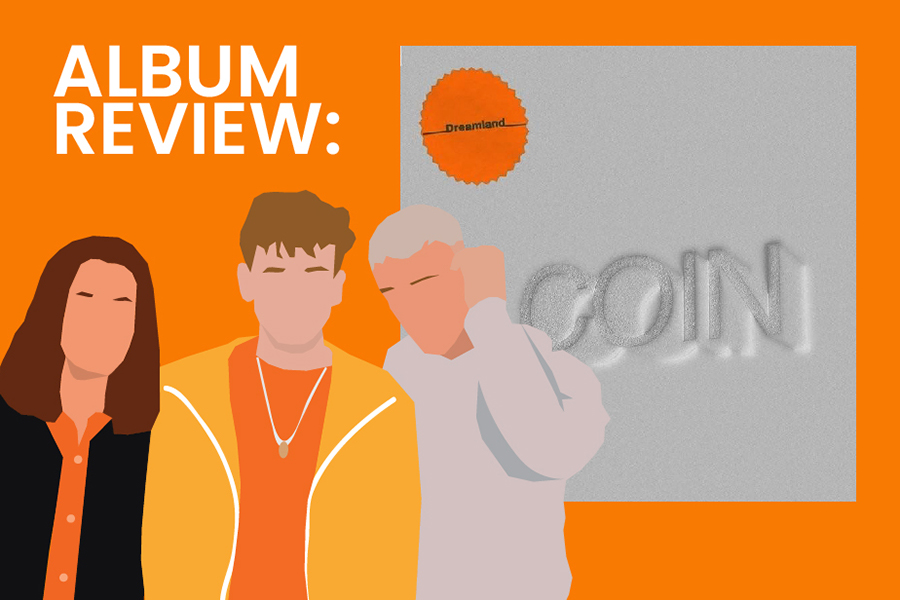 The official release of the COIN album “Dreamland” was on Friday, Feb 21 after being pushed back from mid-January. The album is an indie-pop hit that includes popular songs such as “Cemetery” and “Crash My Car”.

The highly anticipated release of COIN’s new album “Dreamland” was initially set for mid-January, but pushback led to the album’s release occurring Friday, Feb 21. COIN was the very first band that I saw in concert so personally I was ecstatic to hear the album’s release and could not wait for it to finally come out. However, the product that eventually reached my ears was not completely satisfactory.

The album is packed with singles that were released up to two years ago, which makes me think there is not much new to this album whatsoever. Both “Simple Romance” and “Cemetery” were released all the way back in 2018. While these are great pieces of music releasing seven of the 14 tracks before the albums release makes the listener think there really isn’t much new to this album whatsoever. Songs that had not been previously released like “Lately III” were really the only songs that stand out when listening straight through this album.

Currently, I am on my third round of listening to this album straight through and I have been to notice that the only songs that I have personally enjoyed listening to are the seven that were not released before the album’s official debut. The mismanagement of the releasing of songs on this album has taken away from the profound lyrics and satisfying bass lines that members Chase Lawrence, Ryan Winnen, and Joe Memmel worked so hard to create. It has been three years since the last COIN album and many were looking forward to this album’s debate, but sadly the truth is there was not much to look forward to because half of the album was already made public.

In the future, the limiting of singles that will be debuted on an alum should be limited by COIN and bands alike. In the generation of Spotify and Apple Music where music is instant and there is no waiting, I believe waiting to release most of the album is beneficial. Allowing fans to look forward to a completely new set of songs will benefit the artist as well as allowing fans to have more music to enjoy on the album. While I do not have many complaints with the music released on COIN’s “Dreamland” album the way in which the handled the release was unsatisfactory and led me to be disappointed.