Addition of juniors and underclassmen is beneficial for upcoming season 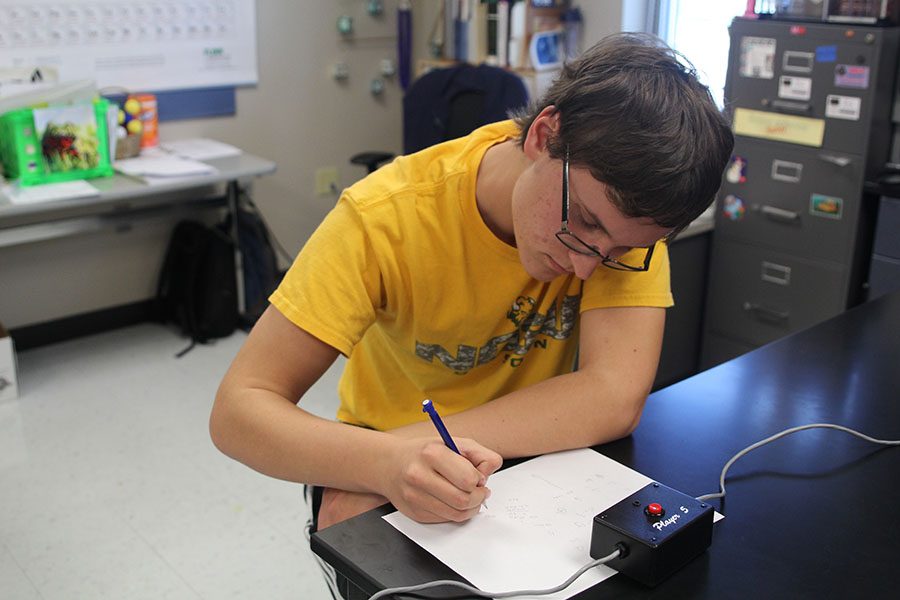 At a Quiz Bowl practice on Monday, Oct. 23, junior Will Hect solves a math problem.

As they prepare for the upcoming season, the dynamic of the Quiz Bowl team and member specialties has changed as members have adjusted to the loss of graduated seniors and the addition of underclassmen to the varsity team.

The team competes at each meet with a team of five members, all of which typically have a different specialty: language arts, social sciences, sciences, mathematics and fine arts. Although each member is allowed to answer questions regarding any section of the meet, most specialize in a certain portion, spending practices perfecting and fine-tuning skills for that section.

According to senior Landon Butler, all members typically pitch in to answer questions, regardless of their specialty.

“We’re good about cross-over between sections,” Butler said. “We all have our specialties, but we all bleed over because you need to have two or three people on every section to be successful.”

Despite the loss of seniors who had specialized in specific sections, Butler said he is excited for the coming season.

“This year, since we lost some pretty stellar seniors last year, we’re all trying to cover the gaps that we lost,” Butler said. “And so we have some really stellar underclassmen who are juniors.”

Among these underclassmen is junior Will Hecht, who said his strengths on the team are math and social studies. Hecht, who has been on the team since his freshman year, said he thinks the team will do “pretty good this year,” since “everyone is pitching in.”

Butler said the team has high hopes for the season.

“Obviously getting to state is a big goal for us, finishing in the top four or top five, and I think we have the ability to do so,” Butler said. “The juniors and underclassmen are really helping us [with that].”

Quiz Bowl will compete in its first meet at Eudora High School on Wednesday, Nov. 15.