Quiz Bowl makes it to championship rounds at regional tournament

After going 3-2 in preliminary rounds, the team went 1-4 in the champions bracket and just missed qualifying for state 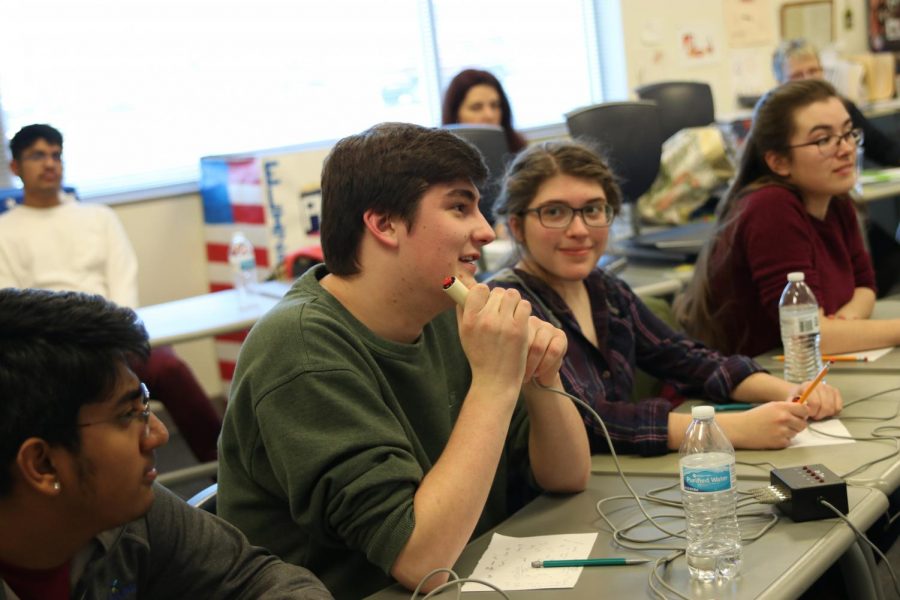 Laughing with the speaker, senior Noah Hookstra cracks a joke after answering a question correctly. The Quiz Bowl team made it to championship rounds at the regional tournament Thursday, Feb. 3.

The Quiz Bowl team competed against 13 other teams at the district regional qualifier at Olathe North Thursday, Feb. 3. While the team was not able to finish in the top four, which would have allowed them to qualify to state, they broke into the champions bracket of the top six teams after finishing 3-2 in preliminary rounds.

Senior Noah Hookstra was happy with the team’s performance considering the difficulty of their opponents.

“I think overall we did well,” Hookstra said. “We were against some really, really competitive teams, and I think we really showed up.

Like Hookstra, junior Manoj Turaga was excited by the success of the team.

“We were able to get to the champions bracket which is incredible considering the competition that we faced,” Turaga said. “I’m overall pretty proud of what we accomplished this season.”

The Scholar’s Bowl team loses the fifth and final championship round of their regional tournament against Olathe North with a score of 75-30.

Hookstra feels that the team learned how to work together better as the season went on.

“You can really tell the growth from the first tournament,” Hookstra said. “We’ve really grown in terms of how well we work together.”

While Hookstra was happy with the increased cooperation, he feels it sometimes hurt the team more than it helped the team.

“I think that sometimes [cooperation] can actually be a hindrance because we want to confirm our answers with each other, and that can often lead to the other team getting the answers before we do,” Hookstra said.

For Turaga, this season has allowed him and the rest of the team to continue getting better.

“I feel like I improved … and the team improved a lot too,” Turaga said. “We’ve been really close to winning a lot of tournaments … and I feel like there’s still a lot of room for improvement, but as of right now I’m pretty pleased with our performance.”

Hookstra is happy to see the program starting to return to some its former glory.

“We broke into the finals rounds, which we haven’t done in recent memory,” Hookstra said. “[The program] has kind of dwindled more recently. My freshman year there was a big outgoing class and since then it’s been brutal. I think we have had a bounce back in terms of numbers and … I’m happy with the success that we’ve been able to see in recent years.”

A lot of the reason for this success is the influence of a new coach: science teacher Landra Fair. Fair has spent the season learning anything that she possibly could about how the activity works.

“I had to learn how the tournament’s ran, and what was the best way to practice and how to determine which students should go to which tournaments,” Fair said. “I basically had to learn everything because I knew none of it.”

For Fair, increasing membership is key to the team’s success next year.

“Going forward, I would like to have more people of more ages,” Fair said. “I would like a way to get students that are going to be good at it but are super busy.”

Looking forward, Turaga is hoping to continue building on the success of this year.