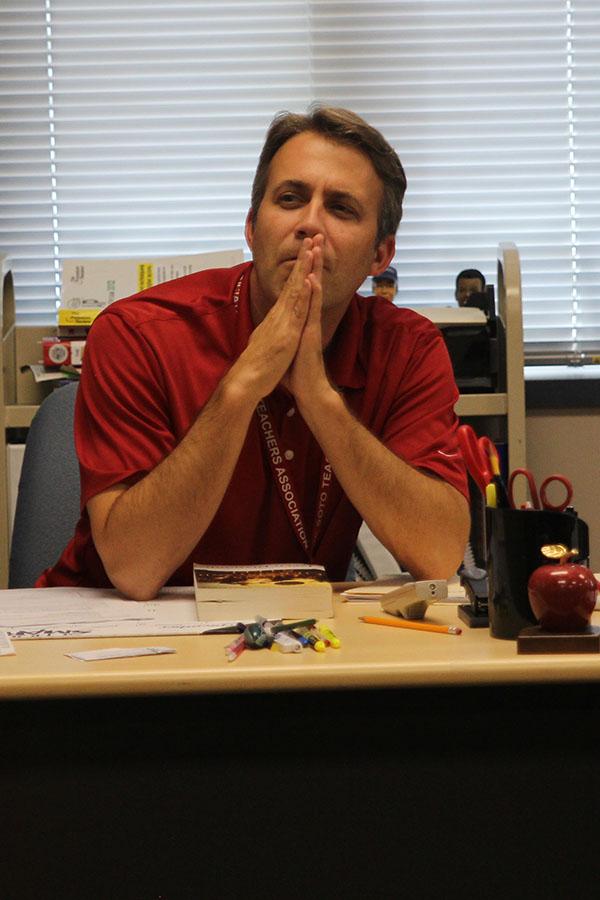 “GSA stands for Gay-Straight Alliance and it’s an association of people with multiple sexualities that come together to provide support and advice for each other.”

When was GSA formed?

“This is the fourth year the club has been together.”

How did you get involved with GSA?

“Two students approached me and asked if I would be willing to help form and sponsor the club.”

What types of activities does GSA do?

“Homecoming is a big thing we do, as well as our meetings discussing anti-bullying and the day of silence for the National Anti-Bullying campaign.”

What generally happens at a meeting?

“At the beginning of the year, we generally plan Homecoming but right now they’re playing a game sort of like charades where they act out different situations they may run into.”

Homecoming week is one of GSA’s biggest events, what kinds of things do you do to prepare for it?

“Initially right now, planning the float and everything that is going to go into it with the trailor and decorations.”

How often does GSA meet?

“We meet every Tuesday.”

How does this club benefit the students of Mill Valley?

“It gives students an opportunity to be supported in their interests as well as finding like-minded students. The best thing provided by existing is that GSA reminds students they can be different and be accepted for being different.”

How does this club differ from other clubs at Mill Valley?

“This is a club centered around people’s identities, and it really brings the stronger feelings out in people.”

Do you plan on making any changes to the club?

“I would like to see them become more active throughout the school.”

Who leads the GSA meetings?

“It is generally an upperclassman, but we have a president who is in charge of everything.”

How many people are in the club?

“In previous years we have had anywhere from 10-30 people at meetings. But this year we’ve had about 20 people at each of the meetings.”

What do you expect from the club in the upcoming year?

Do you plan on continuing to sponsor the club?

“As long as the kids in the club still want me to sponsor, I will. Especially because it can be so hard to find a sponsor willing to advocate on their behalves.”

Have you had any conflicts because of the uniqueness of the club?

“In the homecoming parade, we have had students spit on by people and sometimes parents don’t let their kids accept candy from the students in our club.”