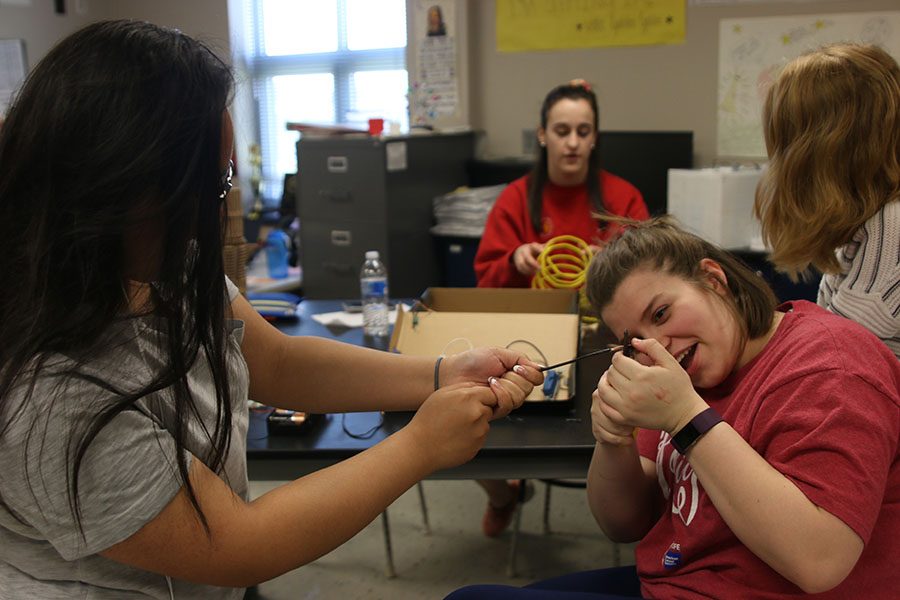 In efforts to expose the copper wire, juniors Crystal Sivilayvong and Lindsey Edwards pull at either ends of electrical wire on Tuesday, April 24.

As wire, cardboard and electrical tape lie haphazardly on table tops, science teacher Chad Brown helps students work on their circuits project. The goal of the project, according to Brown, is to give students “a safe place for them to play around with electricity and not get hurt and still see how things work and see what conducts electricity and what doesn’t conduct electricity and how things need to be connected.”

Before Brown began teaching at the school, the “friendship detector” project was assigned by his predecessor Alyssa Weir. He then adapted it so that students would learn through the process.

For junior Sierra Chappell, the project has presented an opportunity to learn the material in a newer, more effective way.

“I’m a lot more of a visual and hands-on learner,” Chappell said. “So, if I’m actually doing stuff to learn the subject better, then it’s better for me than just writing it out and having to memorize it for a test or something like that.”

Some students, such as junior Dustyn Sweet, have had experience with circuitry from engineering classes. However, according to Sweet, the project still offers benefits.

“I’ve already done something kind of similar in my engineering class, so I kind of know what we’re doing,” Sweet said. “It gives more of a hands-on experience so you can cement it more to learn it.”

Regardless, Brown emphasizes the how universal the project is, benefiting students.

“There are circuits all around us, there are electrons flying everywhere,” Brown said. “This is an opportunity for them to explore a different side of that, to explore or maybe think of things a little differently.”

While the experience can be frustrating, as Chappell found during the creation of her breakfast-themed project, it can also be immensely rewarding.

“[My group was] struggling so hard this whole entire time,” Chappell said. “We were just laughing at ourselves, because we were like, ‘this is never going to work.’ And then [the bulb] lit up, and we’re all just [shocked] because all our hard work just paid off.”

However, Brown hopes that, whether or not the circuit was functional, students are able to take away insights from the process.

“Project-based learning is excellent,” Brown said. “But, it’s also time-consuming, it’s messy, and as a teacher it’s disconcerting to just let people fail. But, the failure is something that really allows them to learn on a deeper level.”