Opinion: A blast from the past: childhood TV show edition 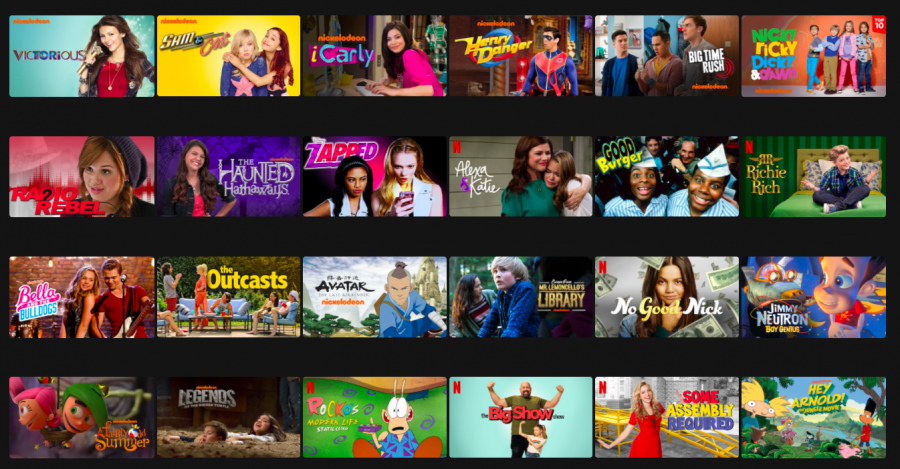 Many shows from Nickelodeon have become popular on Netflix.

When we were kids, channels like Disney, Disney Junior,  Nickelodeon and others were a large part of many children’s childhoods. Now networks like Netflix, Hulu and Disney+ have taken over our old childhood shows and have changed to less child-like shows. Recently, Netflix has started to incorporate our old shows into their network for the people who missed watching the shows and wanted a sense of their childhood back. Shows like Victorious, iCarly, Big Time Rush, Miraculous and many others had become trending in days, and still continue to be on the trending list.

Victorious: During Netflix’s November announcements, they released a statement telling fans that Nickelodeon shows were going to be added. When Victorious was added, many fans rushed to their computers to watch their past favorite show. The show Victorious came out on Nickelodeon on March 27, 2010 and follows a young singer named Tori Vega, who took over her sister’s place in the school show at Hollywood Arts High School in Hollywood, California. The crowd and school was amazed by Tori’s voice that they asked her if she wanted to join the school. The plot of the show is following Tori and her friends as they go around school, as well as all the crazy adventures that arise. When I was growing up, Victorious was one of my favorite shows to watch on Nickelodeon on a Saturday morning, so when I saw that it was being added to Netflix, I was happy to see a show from my childhood finally on a streaming service I could watch.

iCarly: On February 8, 2021, iCarly was added on to Netflix and in a matter of days was seen  on the trending page. iCarly was first released on September 8, 2007 on Nickelodeon and the show is about three friends, Carly Shay, Sam Puckett and Freddie Benson created a webshow of them and doing funny skits and soon found out their show became a hit sensation. Many shows such as Victorious and iCarly create crossover episodes between each other, so some episodes may have actors from other Nickelodeon shows. Alongside Victorious, iCarly was a show I used to watch everyday after school. The episodes were all different, so it wasn’t a huge deal if you skipped one, but they tied together nicely.

Big Time Rush: Big Time Rush was created on November 28, 2009 and became a huge hit on Netflix shortly after being added on March 26, 2021. The show is a comedical show about four friends from Duluth, Minnesota: Kendall Knight, James Diamond, Carlos Garcia and Logan Mitchell, who were chosen to form a boyband in Hollywood. The show follows the friends as they go through crazy adventures, heartbreak and music. Whenever I turned the tv on when I was younger, I would instantly try and find Big Time Rush on Nickelodeon to see if it was playing. It was a funny and interesting show to watch whether you were bored or to put it on in the background.

Miraculous: Tales of Ladybug and Cat Noir: The first season of Miraculous came out on September 1, 2015, and is set in Paris, France. Although the cartoon was not as well known as the other shows were, when it first came out but when it was added onto Netflix, it became an instant hit and was one of Netflix’s main shows for multiple days. The show is about Marinette Dupain-Cheng and Adrien Agreste are chosen to be able to turn into superheroes when evil appears with their special item that they are given, and a specific phrase to be able to transform. They must keep their identities hidden, but yet the two main characters know each other outside of their superhero side but do not know they are each other’s companion. When I was younger I did not know the show very well. I had only seen a couple of episodes on youtube, but soon after that forgot about it until it was a trending hit on Netflix.