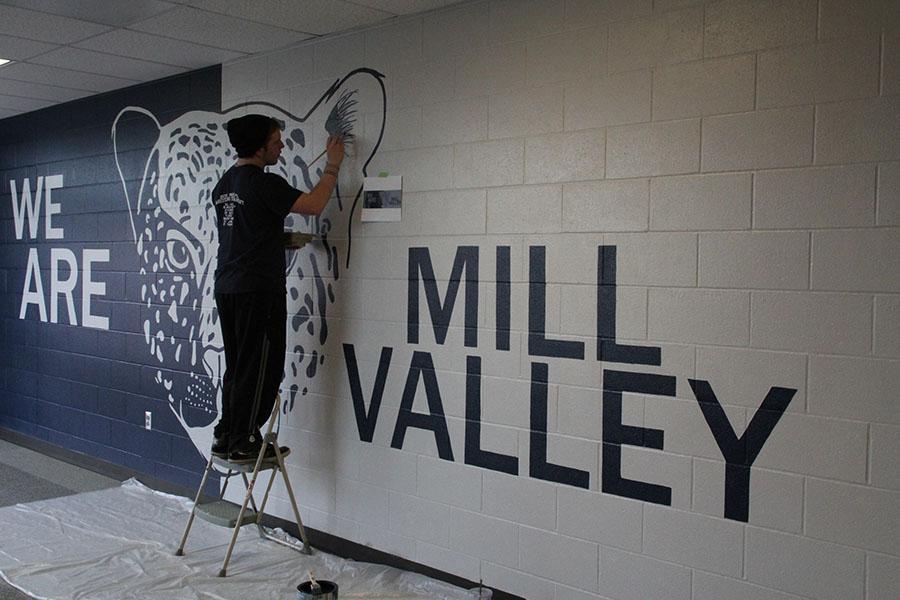 NAHS vice president Steven Blaine puts a few finishing touches on the new mural in the C-wing on Thursday, Jan. 16. “The actual painting was hard, but when you finish it, it all just makes it worth while,” Blaine said.

The National Art Honor Society has begun working on a mural system intended to span the entire lower C-wing. They recently completed one mural by the C-wing staircase and are preparing concepts for future murals.

“The primary reason we’ve created the murals for the C-wing is because right now it looks like an institution,” NAHS sponsor Jerry Howard said. “It looks like a prison. When you walk up and down the halls, they’re all the same color. They’re all the same institutional looking walls. The C-wing is primarily full of creative classes … Yet when you walk out in the halls you’d have no idea [all these classes are here].”

They plan to create a mural system that Howard describes as a “silhouette mural.” A line will span the course of that mural about a foot off the ground. When the line reaches a certain classroom, it will change into a visual representation of that class’s subject before transforming back into a line.

“It takes the walls from being institutionalized, and it’s just kind of a creative way to do signage,” Howard said. “It’s just an informative mural. It’s really kind of a different twist. It’s not just aesthetic; it’s informative. It’s incorporating all those things together. That’s kind of our next thing.”

“Each mural kind of has a different purpose,” Blaine said. “Mr. Howard had in mind for this mural to be a marker like the jaguar statue. So maybe if you’re a new student in the building, you can use it as a reference point.”

In order to create a mural, NAHS members must submit their concepts to the administration for review. The concepts must meet certain requirements, but other requirements may be added later to the original concept.

“We will submit an idea of what we want to do, and they will give us requirements,” Blaine said. “For [our most recent mural], we had to have a jaguar head, and it had to say ‘We ARE Mill Valley.’ They give us a list of criteria. Normally, they’ll give us the criteria first before we work on any concept.”

In order to fund the project, Howard has to turn in a purchase order request to the administration for an approved mural.

“Because we’re doing artwork for the school, the money is coming from the school. They’re paying those fees,” Howard said.

Howard has also proposed a solution to “recycle” old murals for more wall space. He suggests that the school take a professional picture of old murals, archive them or hang them up for everyone to see. This would give NAHS more wall space to create more murals.

“We wouldn’t want to mess up the heritage and the nostalgia of what was done in the past,” Howard said. “It’s just in the developmental stage right now. Now we just have to choose to implement it.”