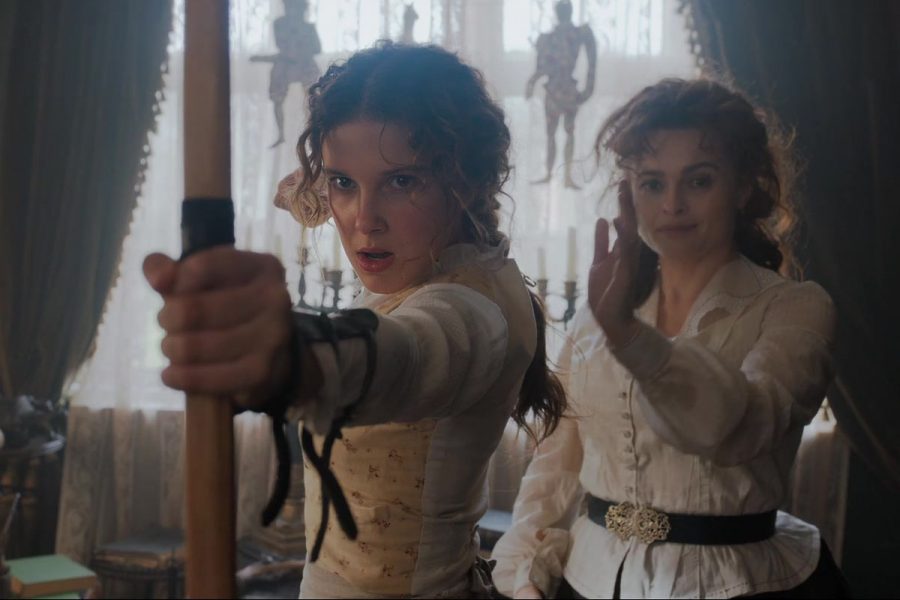 The Sherlock Holmes series spinoff “Enola Holmes” (2020) based on the series written by Nancy Springer. The story is based on the younger sister of Sherlock and Mycroft Holmes. The film can be accessed on Netflix as of Oct. 12, 2020.

Grace: Overall, I thought the plot was incredibly captivating. It was a clever mix of family and politics. However, there were some underdeveloped points. First, I would have liked to hear more about Enola Holmes’ mother Eudoria’s revolutionary organization. How did they start? Will they continue to exist even after the Reform Bill passed? In addition, I wanted to see what happened to Viscount Tewksbury’s grandmother after her murder attempt. Was she arrested or did she go to jail? Netflix is reportedly working to produce a second movie, so these questions might be answered with a sequel, but the plot line with Tewksbury’s grandmother seemed to come to a conclusion by the end of the first movie.

Molly: The exposition confused me to where the plot was going to go. Was it going to be a teen coming-of-age movie? Or was it going to be a mystery where Enola just followed in the footsteps of Sherlock? No. The writers of this film managed to combine both of those basic plot lines to create a movie like no other. Enola went on adventures and solved mysteries to find her mom while breaking all of the audience expectations to solve problems in a normal way. Plot twists sprinkled the film rooting from her unique schooling stemming from her love for books and connection with her multi-talented mother, ranging from jiu-jitsu to botany.

Grace: I had so much fun watching this movie. It was fast-paced with a ton of action and mystery. I especially loved the fight scenes where Enola was able to show off her jiu-jitsu skills. There were even a couple of jump scares and plot twists to keep me on the edge of my seat. As a sucker for romance, I loved Enola and Viscount Tewksbury’s relationship; even though I was a bit disappointed there was no dramatic kiss at the end.

Molly: As there was a variety of cinematic universes colliding in the top-billed cast of the film, there was never a dull moment. Familiar faces such as Finnick Odaire (Sam Claflin) from the Hunger Games series as Mycroft Holmes, both Bellatrix Lestrange (Helena Bonham Carter) and Aunt Petunia (Fiona Shaw) as Eudoria Holmes and Miss Harrison (respectively) from the Harry Potter series, SuperMan(Henry Cavill) from Man of Steel as Sherlock and Eleven (Millie Bobby Brown) from Stranger Things as Enola added a special element to the enjoyability of the film.

Grace: The movie was really well done. The scenes were aesthetically pleasing, especially the scenes of Enola learning to fight with her mother in the field outside their house. I loved all of the flashbacks of Enola’s experiences with her mother that helped guide Enola and explain to the audience her train of thought. I also loved when Enola would look directly into the camera as if talking to the audience; I thought it provided comedic relief in intense scenes. I was also very happy with the casting of the movie. Milly Bobby Brown played Enola beautifully, Henry Cavill was an incredible Sherlock, and Helena Bonham Carter did a perfect job capturing the eccentric and strong-minded essence of Eudoria. It was refreshing to have actors and actresses that are actually the age they played. Instead of 25-year-olds playing high schoolers, which has become an industry norm, Milly Bobby Brown is 16 and Louis Partridge, who plays Viscount Tewksbury, is 17. Lastly, I loved the music chosen; it was lively and intense and helped set the mood for the whole movie.

Molly: At the start of the movie I was unsure as to what audience the movie was aimed towards. Since the movie was a Sherlock spinoff, it was definitely a mystery. But, my question was what age group was it for? By the end of the movie it was answered; this movie is for everyone. Throughout the film Enola glares or speaks into the camera to accentuate her anger, instead of this fourth wall break giving an interview-esqe theme, it made it feel more like Dora or The Office, involving the audience in her adventures from start to finish. This simple glance into the camera created comedic relief from the heavier family issues that were going on in Enola’s life, and the fact that Enola was played by Brown allowed a dash of lighthearted energy to these scenes.

Symbolism: Was there a deeper meaning to the film?

Grace: While Eudoria Holmes’ methods may have been extreme, I loved the message that her revolutionary group stood for. They advocated for change and for a better world for all individuals. One of the group’s members, Edith, played by Susie Wokoma, tackled the issue of racial and gender inequality when, as a black woman, she told Sherlock Holmes, a white man, “Politics doesn’t interest you. Why? Because you have no interest in changing the world that suits you so well.” Enola was also an advocate for fighting gender stereotypes by being an amazing detective, fighter, and resisting the ridiculous and stifling “lessons” she was taught at boarding school. Overall, the themes of fighting for equality and change resonated well with me.

Molly: I found the underlying theme and message of the film to be to empower women and to give a heartfelt mystery that isn’t your standard female-led plot. Throughout the film, Enola was constantly defying social norms for women in that time; her feminist actions can be carried over into the present for women to continue battling the patriarchy.

Grace: I absolutely loved this movie. It was a fast-paced and intriguing movie that is perfect for movie nights.

Molly: I highly recommend this PG-13 film for a movie to entertain your friends and family of all ages. “Enola Holmes” will not leave anybody disappointed with the mystery, feminism, romance, action and a good amount of suspense that kept me on my toes, ready for the next scene.