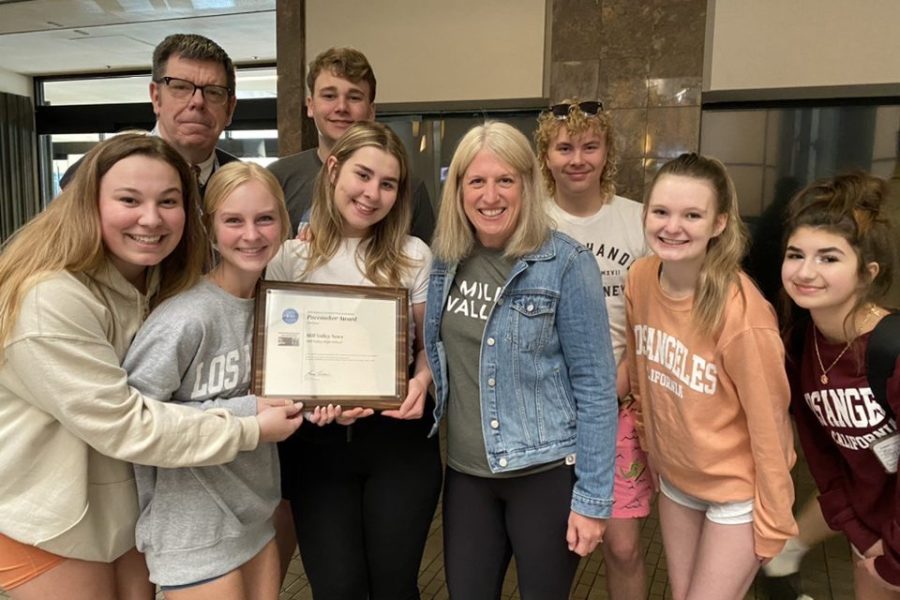 After two year and a half years of waiting, the journalism department once again returned to the JEA/NSPA national high school journalism convention, the first in-person event since COVID. While at the convention in Los Angeles, the staff was one of 20 high schools to win the NSPA Online Pacemaker award and placed in the convention’s Best of Show contest.

Students from both the JAG yearbook and JagWire newspaper staffs flew out to LA Wednesday, April 6. Journalism adviser Kathy Habiger shares her experience in California.

“We did a bit of sightseeing, which is always a part of going to the conventions,” Habiger said. “We also had some learning time at the convention. Meeting new people from around the country is also really fun and it’s just special to see old friends from previous conventions.”

Going on this trip, Habiger also gets to bond with her newspaper and yearbook staff. The staff also gets to learn more about the people they work with.

For the first time, JAG yearbook editor-in-chief, senior Elise Canning, went on the journalism trip. Canning got to sightsee and learn during the convention.

“My favorite part of the trip was getting to meet all the other journalism kids,” Canning said. “All the people are really cool and interesting, everyone is so outgoing. It was also so cool to watch the sunset on the pier, and get to learn from other journalism students.”

The staff got to learn skills to improve their work through the different keynote speakers at the convention. Canning speaks on what she learned on the trip.

“One speaker taught us about umbrella reporting,” Canning said. “This type of report is covering a multitude of things all on one. It was also cool listening to what other journalism staff do with their yearbooks and newspapers.”

Habiger explains that there are many different opportunities to learn at the convention, even as an advisor. The attendees learn from each other.

“I learned about a couple new cameras I want to buy. It’s always valuable just to hear what the students say,” Habiger said. “I think it is super important for the students to learn from other students, even I learn from the students at the convention.”