Forced to take a gap year due to the COVID-19 pandemic, the marching band premiered their competitive marching show on Friday, Oct. 8 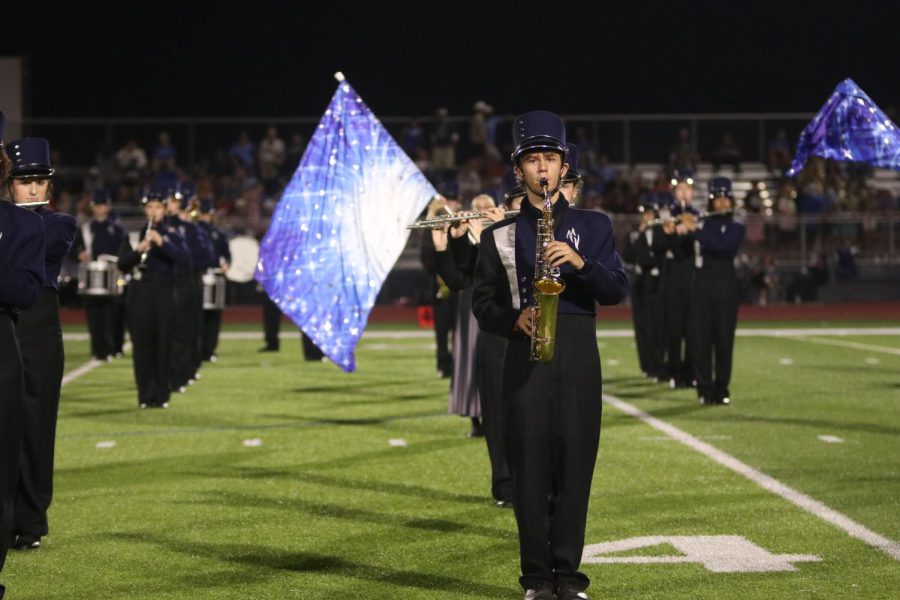 The Marching Jags performed their halftime show at the football game against Olathe West on Friday, Oct. 8. This year, they have gone back to playing in the stands at games and competing in marching festivals as they did before COVID-19.

Drum majors senior Cameron Long, junior Gabby Delpleash, and sophomore Addisyn White led the band in their performance with songs including Into the Clouds, Fly Me to the Moon, and Jedi Steps Finale. The bandhas presented this show at the Emporia State Marching Festival October 6. They will also compete in Manhattan, KS at the Central States Marching Festival on Saturday, October 23.

Last year, COVID-19 restricted much of what the band could do. Senior Abby Hayes, a four-year band member, explained the difficulties of their season.

“It was really strange not being able to experience a normal performance season,” Hayes said. “Even playing music in the stands was taken away.”

Through those hardships, the band gained some strengths. Hayes points out that the pandemic actually brought them closer together.

“COVID brought us closer together because we are all so glad that we can have a marching show this year, so the morale has been high,” Hayes said.

For this year, the marching band had a few things to consider. Junior Brody Shulda, a three-year band member, mentions that many members had not marched before.

“Freshman and sophomores have never marched.” Shulda said. “We have a lot of ground to cover, so seeing an increase in what we’re capable [of] is going to be fun.”

As the Marching Jags return to normalcy, they are also reminded of the reasons they are in band. Senior Katie Bonnstetter, a four-year band member, says that everyone communicates well together.

“People are never afraid to ask questions about what they’re doing or how to do something better,” Bonnstetter said.

Shulda additionally explains that the eagerness of the members is also what makes the season memorable.

“We’re passionate and we enjoy playing music and marching together.” Shulda said. “There’s never a day in band that’s not enjoyable.”