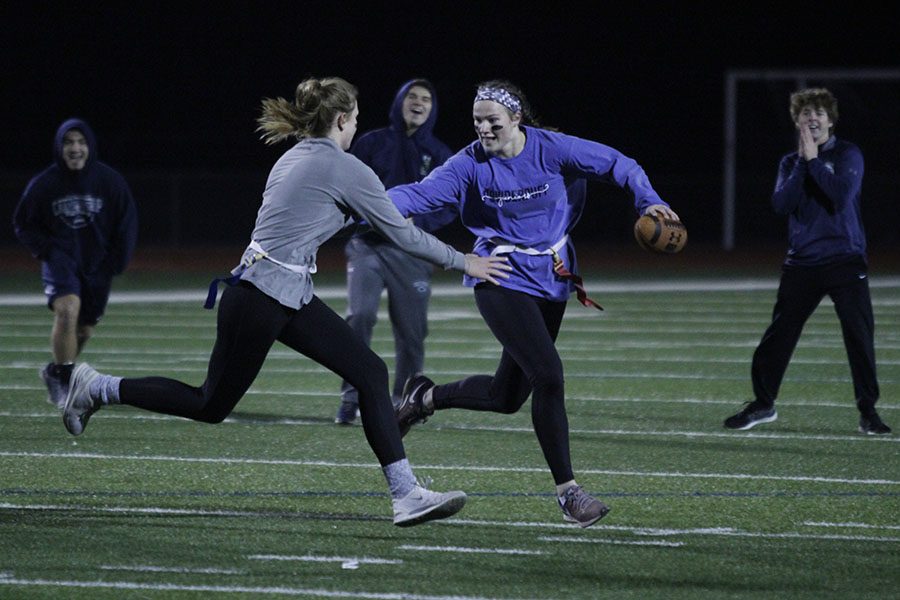 Avoiding the tackle, junior Claire Kaifes gets ready to throw the ball down field, resulting in the juniors win over the seniors on Monday, Nov. 6.

The junior team upset the seniors and took home the win in the annual Powderpuff flag football game on Monday, Nov. 6. They won after getting an interception in the third and final overtime of the game with a final score of 18-18 over the senior team.

For the majority of the game, the seniors led with a score of 6-0. The game featured  little on the offensive side of the ball for both the seniors and juniors. It was not until the final stretch of the second half that the juniors would reach the endzone to tie the score 6-6.

Despite winning the game, Kaifes believes the team did not start the game out very well.

“The first half was a little shaky. I think we were a little nervous coming out of the gate and we didn’t perform well for the first 20 minutes,” Kaifes said. “Then, the second half started and we got a little more serious about it and tied it up with like three seconds left which led to us winning in overtime.”

On the contrary, Zars said she was pleased with the performance of her team, especially compared to last year.

“Last year we were pretty bad because nobody knew what they were doing,” Zars said, “whereas this year everyone got to play a position they wanted to play.”According to junior

Claire Kaifes, the game was decided in an unusual fashion because the score  was so close.

“The rule the officials came up with was that there were going to be two overtimes if the score was tied at regulation,” Kaifes said. “After the overtimes would be sudden death. The seniors had their choice of either offense or defense. … If the seniors scored, they won, and if they didn’t they lost.”

Senior Evan Zars believes the senior team would have scored a lot more points if it weren’t for penalties.

“We scored at least three times, and they got called back because of some blocking penalties and other minor calls,” Zars said.