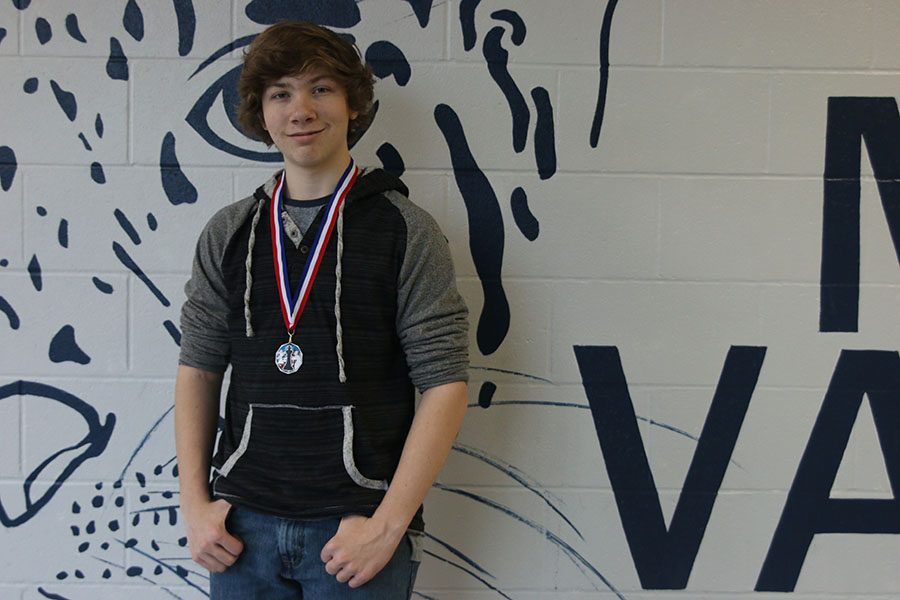 After placing fourth place at a chess competition, junior Andrew Thomas proudly displays his medal Tuesday, Jan. 22. “I started playing about eight to ten years ago and competing three to four months ago,” said Thomas. “I’ve been to one tournament and did pretty well.”

With a look of concentration on his face, junior Andrew Thomas contemplates his next move as he practices for an upcoming competitive chess tournament. Andrew started playing chess 10 years ago but did not start competing in tournaments until 2017.

According to Andrew, he enjoys playing chess so much that he wanted to take it to the next level.

“I chose to go competitive because I really enjoy the game,” Andrew said. “It’s very strategic and I have a very strategic mind so that’s why I like it.”

Andrew’s dad Steven Thomas believes chess made a good fit for Andrew to be involved in because it is similar to his other strengths.

“It has been fun watching Andrew become more involved in chess. It fits in very well with Andrew’s personality and gifts,” Steven said. “It is a good application of his intellectual capacities, as the game involves a lot of opportunities for problem solving and critical thinking.”

Due to the endless number of possibilities, Andrew enjoys having to adapt to new situations in the game.

“In the game of chess, there are more possible ways the game can go than there are atoms in the entire universe,” Andrew said. “There’s a lot of mystery in it and you have no idea what your opponent is going to do. It’s just your strategy over your opponent’s.”

Though Steven helped Andrew learn to play, Andrew surpassed his abilities and had to learn many skills on his own.

“He works hard to improve his game by self-study. He and I play together, but he usually wins because he is more disciplined in the game than I am,” Steven said. “I think that I can only challenge him so far, and that’s where it is good for him to be challenged by other players.”

Though there are many talented players at tournaments and it can be difficult to win, Andrew believes the tough competition helped him improve his skills.

“I enjoy finding people at tournaments who are way better than me,” Andrew said. “Losing to them lets me see what I did wrong and how I can improve for next time.”

The experiences gained at tournaments helped Andrew improve, according to Steven.

“These tournaments have been an experience for Andrew to be able to play several focused games in a single day against different players and have challenging competition,” Steven said. “Even though he hasn’t always won, he maintains his positive attitude and is looking forward to the next time. He has the potential to become a very accomplished chess player.”

Learning new things about the game is as ongoing challenge for Andrew.

“It can be challenging because there’s always someone better than you,” Andrew said. “It’s an easy game to learn but it’s hard to master.”