The journalism department traveled to Dallas, TX on Thursday, Nov. 16 where they received seven national awards 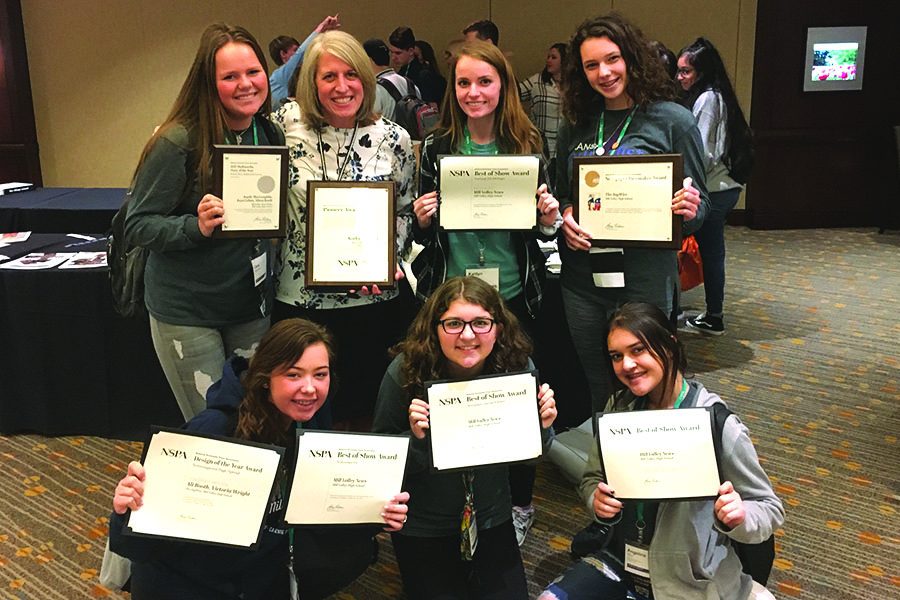 Six members of the journalism department with journalism adviser Kathy Habiger recently attended the National Press Association Fall Conference from Thursday, Nov. 16 to Sunday, Nov. 19 in Dallas, Texas. They were awarded numerous national accolades for the department’s hard work during the 2016-2017 school year.

The department’s seven awards were distributed throughout the JagWire newspaper, JAG yearbook and Mill Valley News website. The publications department received four best-of-show awards with the JAG yearbook placing eighth, while the JagWire and Mill Valley News website placed seventh and third respectively. However, the most notable award was the Pioneer award given to publications advisor Kathy Habiger for going above and beyond to help high school publications and journalism programs pursue excellency; which is the highest award the National Scholastic Press Association can give to a student publications advisor.

The eight place best of show award is a sign of success according to Senior Lauren Ocker, an editor-in-chief of the JAG yearbook.

“It is really exciting because when you get that feedback you know you’re doing well,” Ocker said. “It’s nice to hear [the judges] liked everything we’ve done over the past year.”

The JagWire 2016-2017 newspaper also received their third PaceMaker award in a row, recognizing it among the top 25 best student newspapers in the country.

Senior editor-in–chief Nora Lucas believes the Pacemaker was well-deserved by the 2016-2017 newspaper staff.

“[The Pacemaker] makes me proud of the staff. They’re a bunch of good kids and they do great work,” Lucas said. “It just really marks who’s the best of the best and breaking new grounds with design and writing and [other journalistic aspects].”

According to Habiger, the success of the JagWire, JAG and the Mill Valley News website can be accredited to the long hours spent in the journalism room.

“We get a lot closer with each other than kids in any other class,” Habiger said. “We are here late together, we eat together, we cry together, we are like a family really. We rely on each other as teammates, holding each other accountable to make sure we are doing our best work all the time.”