The jazz band highlighted what they have been working on in class in front of their friends and family Wednesday, Feb. 26 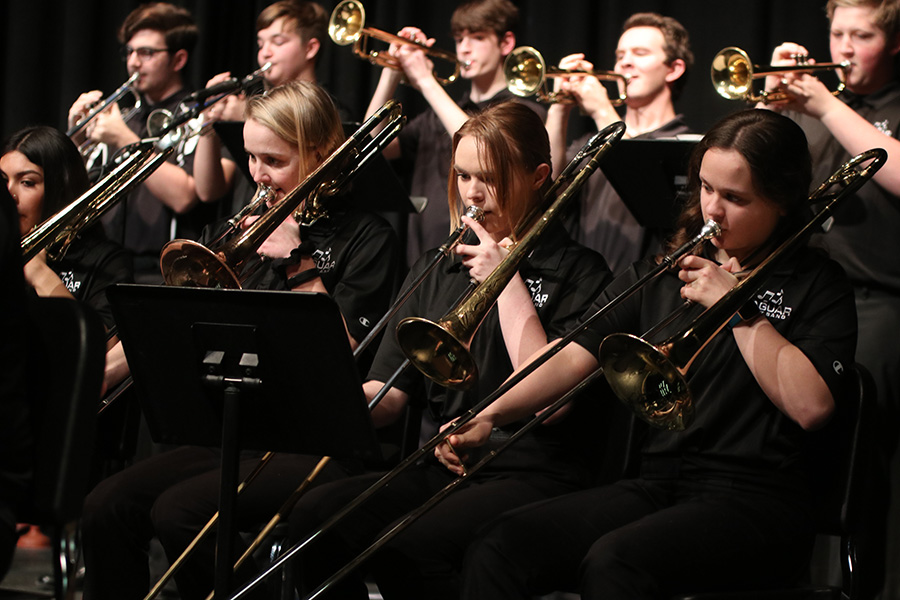 The jazz band performed a concert in front of friends and family Wednesday, Feb. 26 in the little theater. Their concert included seven pieces: “Orange Sherbert,” “Bye Bye Blackbird,” “Sister Sadie,” “All of Me,” “Nutville,” “Big Swing Face” and “Afterburner.”

“I feel like the band as a whole was pretty nice,” Kingsbury said. “There’s a couple parts that we were iffy on, but live music is not going to be perfect. There’s going to be errors, but it’s kind of the whole fun of it. You’re making your own twist on it, I guess.”

The jazz band started preparation for the concert toward the beginning of the school year. Since they started learning the material, senior Adam Tilden has seen improvement.

“As a whole class, we’ve grown very much, since last Nov,” Tilden said. “As for musical skills, rhythmically, dynamically and tone.”

Throughout each song, various students from the jazz band performed solos that highlighted their talent. Kingsbury, along with 11 other jazz band members, played solos. Kingsbury had a solo in four out of the seven songs.

“‘Bye Bye Blackbird,’ [is] the one that had my feature,” Kingsbury said. “I didn’t feel like I did as well as I did in practice with it, but I still think it came out pretty good in the end. You’re going to mess up, but you grow from that eventually.”

Although he enjoyed all of the music, “Sister Sadie” stuck out to Tilden.

“‘I had a solo and the thing that the saxophone section did was pretty fun,” Tilden said. “Personally, I think I did well.”

Kingsbury’s passion for music and his peers make jazz band something he looks forward to every day.

“I think jazz band is my favorite class. It’s a bunch of musicians that get together and they want to play music,” Kingsbury said. “It’s really fun that every single silver day, I get to go in and I get to play jazz with a bunch of really good players.”

Junior John Fraka will be competing in All State Jazz Band Friday, Feb. 28, as the only student representing Mill Valley.

The next jazz band concert is Thursday, April 30.