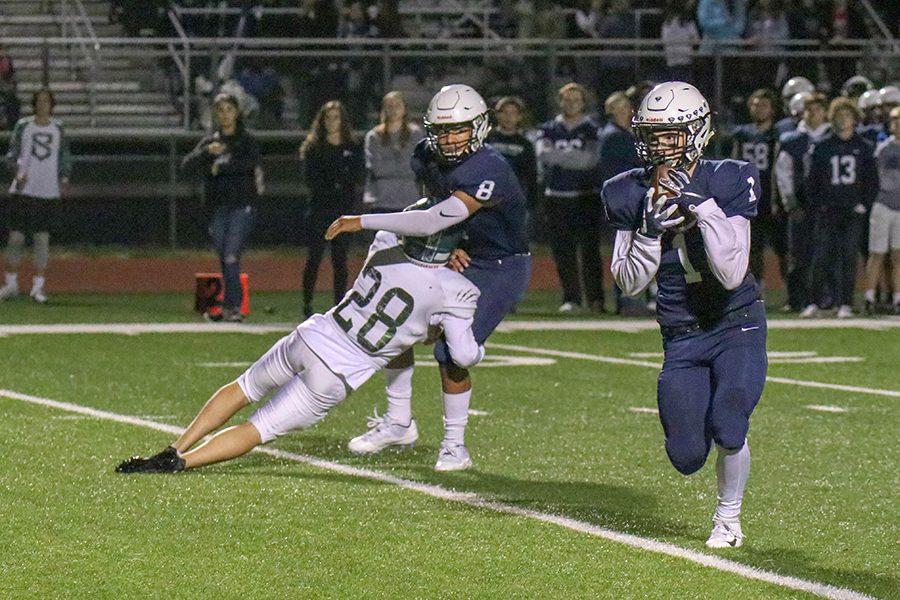 After being thrown the ball, senior Cameron Young runs the ball downfield against Blue Valley Southwest on Friday, Oct. 19. “It’s the best feeling there is.” said Young “There is nothing like playing on Friday night with your brothers by your side.”

The Jaguars defeated the Blue Valley Southwest Timberwolves 56-7 in their final regular season game on Friday, Oct. 19. Before the game, football seniors were recognized.

Head coach Joel Applebee is proud of the seniors and what they mean to the team.

“I love them. They work really hard,” Applebee said. “The legacy they’re getting a chance to leave here is huge. The success they’ve had in the past and the success they want to have here in the playoffs speaks volumes to their work ethic. I’m very proud of them.”

The Timberwolves started the game with a three-and-out. Senior wide receiver Grant Rachwal had a 22-yard catch to set up a 38-yard run by senior running back Cameron Young for a touchdown. After a successful extra point by senior kicker Jack Matchette, the Jaguars led 7-0 early in the first quarter.

Senior offensive lineman Luke Fleming felt that the offense was able to come together, which helped the Jaguars’ success.

“This week, we felt like we really clicked and everyone believed in each other,” Fleming said. “We finally had each others’ back. We just played for each other.”

Senior defensive lineman Christian Roth had a sack on third down to force another three-and-out by the Timberwolves. The Jaguars capitalized on this with an 11-yard run by Young for a touchdown. This gave the Jaguars a 14-0 lead midway through the first quarter.

Senior defensive back Steven Colling felt the defense had confidence coming in from a successful week.

“We had a great week of practice so all we had to do was execute,” Colling said. “I have to give credit to coach Hudgins for all of our success because without him, we wouldn’t be nearly as dominant as we have been … All we have to do is execute and we did that pretty dang well.”

Senior defensive back Ben Hanson intercepted the ball on the following Timberwolves drive. The Jaguars capitalized on the turnover with a touchdown run by Young. A successful extra point by sophomore kicker Chris Tennant put the Jaguars up 35-0 midway through the second quarter.

The Timberwolves scored a touchdown in the last two minutes of the half, bringing the score to 35-7.

At halftime, the remaining fall sports seniors were recognized.

In the Jaguars’ first drive of the second half, Young ran the ball 32 yards for a touchdown, his fourth of the night. Matchette’s extra point gave the Jaguars a 42-7 lead.

For Young, the successful game was a great feeling.

“It’s the best feeling there is,” Young said. “There is nothing like playing on Friday night with your brothers by your side.”

Applebee believes the game was a good team effort and that the team is “rising up” heading into the playoffs.

The Jaguars will be the fourth seed in the playoffs. They will play at home against Topeka West on Friday, Oct. 26.

Heading into the playoffs, Roth believes the team needs to remain determined to succeed.

“[We need to] keep our heads up and we’ve got to play like it’s sudden death, because it is,” Roth said.

Fleming believes the win will help drive the team into the playoffs.

“This is a big win for us because other teams see this on film, so they’re going to know we’re a contender,” Fleming said. “We’re going to be a decent seed so we’ll take this momentum into the playoffs and take advantage of it.”