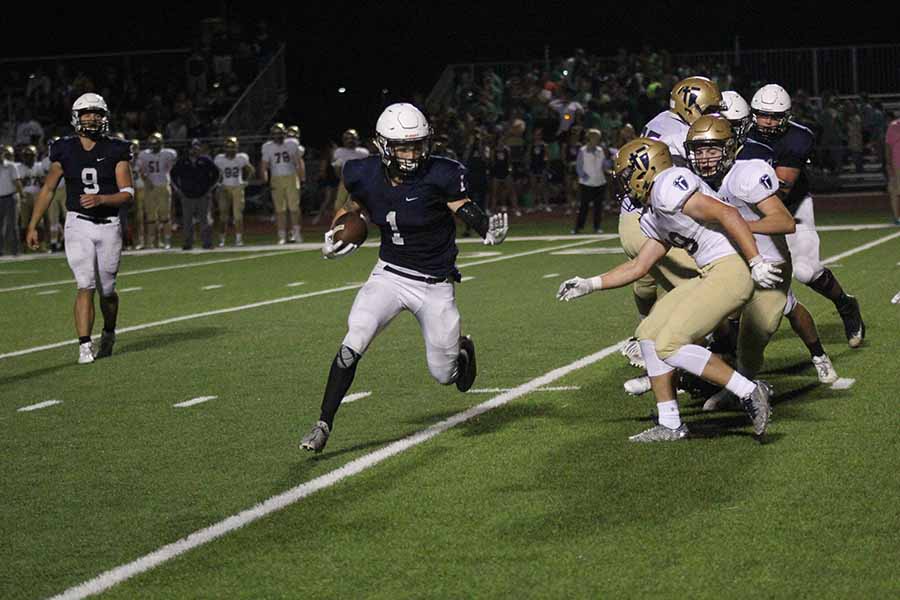 The Jaguars lost to the St. Thomas Aquinas Saints 42-21 on Friday, Sept. 29. With this loss the Jaguars record falls to 2-3.

The Saints scored a touchdown on their first two drives of the game. They missed the extra point on the first touchdown, but made up for it on the second with a successful two-point conversion.

“We knew it was going to be a tough competition. They’re good, [and] we know we are also good,” Matchette said. “We knew if we tried our best we could maintain a competition and hopefully keep it close, but focus problems, stuff like that, stopped us from doing it.”

The Saints came out of halftime with a quick start, scoring another touchdown less than a minute into the half with a 38-yard reception. The Saints were again successful on fourth down early in the fourth quarter, when they ran it in for a 26-yard touchdown.

The Jaguars responded with a running touchdown by junior running back Cameron Young. After a Saints fumble recovered by junior defensive lineman Tyler Dean, Young ran it in again, making the score 42-21. This would be the final score.

Young believes that the change in strategy allowed the run game to open up towards the end of the game.

“We started to call some different plays, started to change it up front a bit in our blocking scheme, and then we we’re able to move the ball,” Young said. “So, it’s just an adjustment we probably needed to make earlier in the game but didn’t until later.”

The Jaguars will look to rebound next week at home against the Bishop Miege Stags on Friday, Oct. 6.

Matchette believes after, what he sees as, a tough week of practice, the Jaguars will come ready to compete next week.

“Meige, they’re good, so we just need to work really hard at practice. We all know we can do it, [and] we’re all successful,” Matchette said. “It’s just mistakes [and] mental toughness — that’s all we have to focus on.”