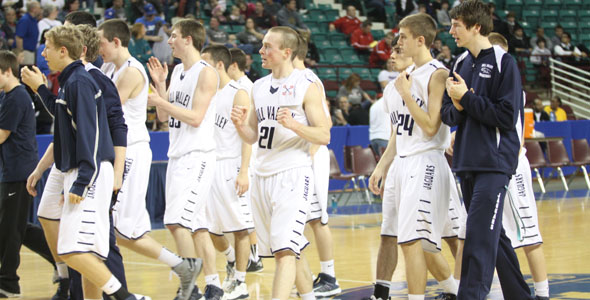 The Jaguars won their first round of state play against the Andover High School Trojans, 56-46, on Thursday, March 7 in Topeka.

This is the first time in school history both the boys and girls teams have advanced to the state semifinals. The boys will have a rematch with Shawnee Mission South High School at 4:45p.m. on Friday, March 7 and the girls will play Kapaun-Mt. Carmel at 6:30p.m.

The first points of the game were scored by sophomore forward Patrick Muldoon with an assist by senior forward Nathan Stacy. Kain followed with a steal on Andover’s next possession and junior guard Wyatt Voorhes made the shot to bring the score to 4-0, Jaguars.

Senior guard Austin Moylan said the intensity at the beginning of the game got the Jaguars off to a good start.

“The start is always fun,” Moylan said. “That was a blast.”

After the Trojans scored their first points after an offensive rebound, freshman guard Logan Koch followed with two free throws and a three-pointer.

“It was fun,” Koch said. “It was a great experience; we played great. What we do in practice every day comes out in the game.”

Ending the first quarter with Jaguars leading 15-11, the Trojans scored the first two points of the second quarter.  The Jaguars then extended the lead, with help to three-pointers by Stacy and Voorhees. The first half ended with the Jaguars leading 27-21.

After exchanging two-point plays with the Jaguars, Andover scored six points in a row and took the lead at 29-27. The Jaguars regained the lead at 31-29 after two free throws by Voorhes, but Andover answered with a three to move the score to 32-31, Trojans.

Even though the Jaguars were struggling, head coach Justin Bogart said they stepped up and answered when the Trojans began to threaten.

“We were really tough,” Bogart said. “We did exactly what we wanted to do which was get rebounds, make layups and make free throws. We were tough enough to do that.”

In the middle of the third quarter, Bogart called a timeout and the Jaguars went on a 10-3 run to re-capture the lead and end the quarter, 42-34.

The Trojans came within five with 1:46 remaining in the game and the score at 48-43, Jaguars. Koch, Stacy and Voorhes combined for eight free throws to keep the Jaguars in the lead. Koch scored five of the free throws and created a turnover by drawing a charge at the end of the game to give the control back to the Jaguars.

“[The charge was] going out to my boy Aaron Craft, my favorite player,” Koch said. “He takes them all the time.”

Muldoon attributed a lot of the success at the end of the game to Koch.

“We finished really well, especially with our freshman taking care of the ball and sinking free throws,” Muldoon said. “That’s our bread and butter. “

Although he sees the impact Koch had on the game, Muldoon thinks that this game means the most to the seniors.

“They deserve it more than anybody on our team,” Muldoon said. “They’ve worked so hard the past four years and this is finally their chance.”

“[I’m looking forward to] moving on to the next game and continuing our season,” Moylan said. “It’s not over yet. It’s been a great career and I’m just not ready for it to be over but I’m glad we’ve gotten to where we’ve gotten.”

Senior Jake Theis has been a part of the team since his freshman year, but has not been able to play his senior year after suffering an injury during football season. However, he has still remained a part of the team. Theis said that his excitement at the team’s win is not any less than it would be if her were able to play.

“It’s sad and all but being around the guys I love and seeing winning makes it a lot easier for me,” Theis said. “Seeing how much success we’re having as a team makes it not so bad. Right now it’s exciting. Win and go on or lose and go home, and we keep on winning.  I feel like Mill Valley’s now going to be on the map for winning it all. We’ll be in the state tournament for the next couple years.”

However, the Jaguars will face an undefeated SMSouth team, which they lost to 58-39 on Friday, Dec. 14.

“I’m excited because the first time didn’t go so well but I think it will be a lot closer,” Kain said.

Moylan recognizes that the game will be tough, but agrees with Kain.

“We’ve already played them once this year and I’m looking forward to playing them again,” Moylan said. “We’ve just got to play a good game.”