The tournament, Wednesday, Jan. 29, raised money for the upcoming Relay for Life event 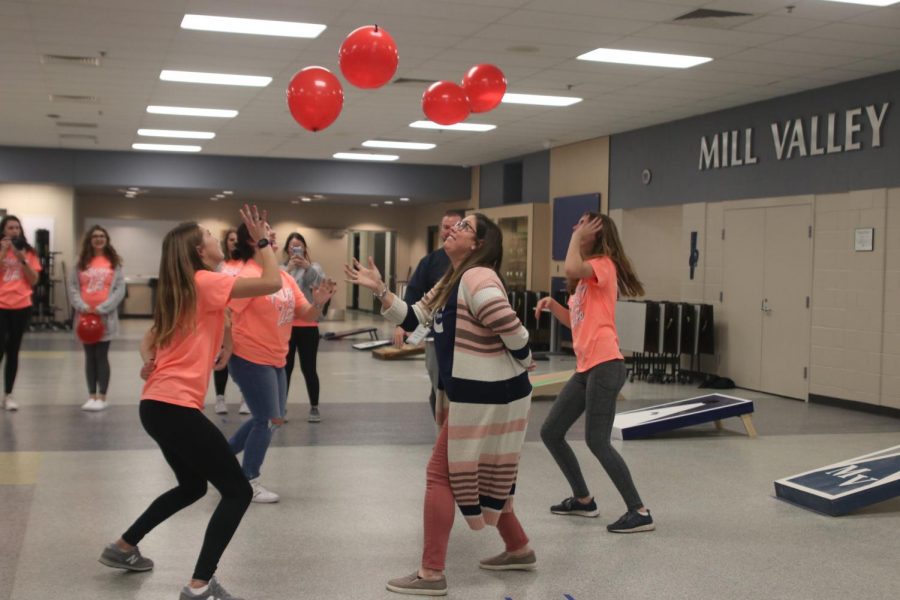 To help break ties and eliminate competitors in the tournament, teams played a new game. The participants had to hold one hand behind their back while trying to keep balloons in the air between them and their partner. The tournament was held Wednesday, Jan. 29 by the Relay for Life committee. The event was held to help raise money and get the word out about the upcoming event Relay for Life.

Jaguar Nation held its first cornhole tournament Wednesday, Jan. 29, to help raise money for the upcoming Relay for Life event in March. A total of 17 student teams and 7 committee member teams competed in the event to play for a $30 QuikTrip gift card.

After numerous rounds, English teacher Cathy Stevens and her husband’s team, known by their name “The Steve Dogs”, won the tournament.

This event, which was new this year to help raise money, was a success according to Relay for Life committee member Alyssa Canning.

“I would say we had a great turnout, especially for our first year,” Canning said. “The event was organized and a lot of fun.”
Sophomore Bret Weber played in the tournament, and said he would participate again if another event like this was held.

“I enjoyed playing against other classmates and seeing everyone have fun while raising money for a good cause,” Weber said. “I would participate again.”

Jaguar Nation has been hosting Relay for Life events for years, with this year’s event being the fifth annual. Last year’s event raised over $112,000 for cancer research at the American Cancer Society. The event consists of student teams of up to 15 people signed up to raise money with the help of the public. This year’s event is Hollywood themed and will be held Friday, March 27.

As for future events to help raise money for the big event, Canning has no doubt that there will be similar ones held.

“I definitely think that we will hold an event like this again,” Canning said. “We love seeing our students supporting our event and helping us meet our goal.”