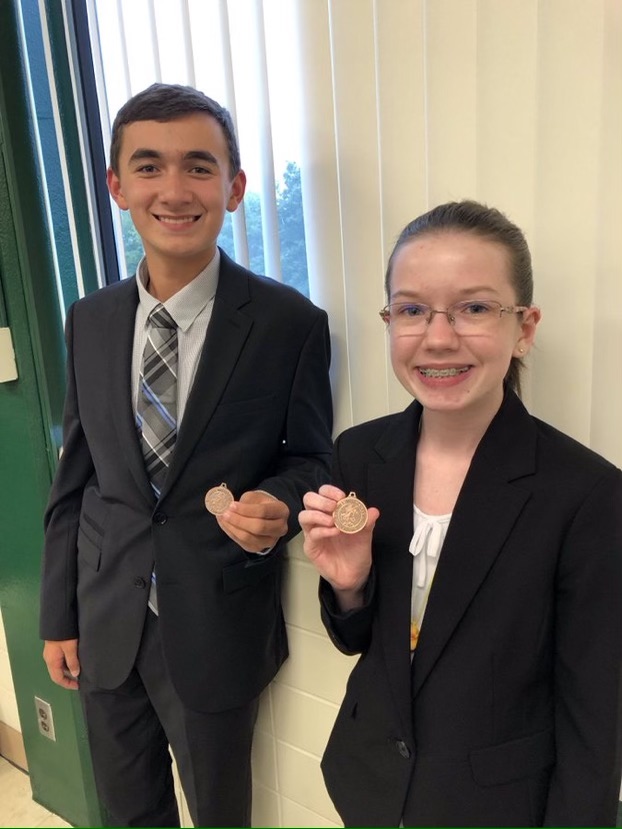 Posing with their medals, sophomores Sarah Johnston and Isaac Steiner smile with their award from a previous debate tournament Oct. 5 2019.

On March 26-27 at the East Kansas National Speech and Debate Qualifier, sophomore Sarah Johnson became the Congress Champion in the House. Johnson competed against 64 other congressional debaters from all over the state of Kansas, and made it into the super session, which consists of the final 15 competitors from other chambers. In the super session, Johnson placed first overall and will speak on behalf of Mill Valley.

The National Speech and Debate Association (NSDA) is an organization where students can participate in creating and debating bills and legislation. The NSDA is a place for students who have a passion to become a politician or be a part of congress to get an idea of what happens in Congress. The other competitors can debate and vote on the bill and collectively decide if it should advance. It is a simulation where students can see what it is like to be in a congressional chamber.

Johnson explains her process of how she became a congressional debater of the House.

“It is an activity where we get to debate different pieces of legislation and simulate what it’s like to be in a congressional chamber. This weekend I went to the East Kansas National Speech and Debate Association’s national qualifying tournament and at that tournament there were 64 individuals in my division or congressional house and I took first out of that group. What I had to do was in the rounds I had to get in the top three of my first chamber and once I did that I moved on to the super session which is the chamber with the top three from all the different chambers and then I took first in that chamber as well.”

Congress contains two different sections: House and Senate. Similar to the senate, two people per school are permitted and the House has as many students from different schools. Each school comes up with bill ideas which then go to Congress to be debated on. Two bills that have been proposed by Mill Valley regarded private military contractors and nuclear testing. All the schools have a chance to see the bill and make corrections which then they bring to debate upon. If the bill passes or fails, there are no changes outside of the debating room. This simulation helps students to feel what it is like similar to an actual congress room.

Johnson shares how she felt leading up to become the Congress champion.

“I was a little nervous because I have always wanted to go to nationals since this has been a goal set for myself for a long time. Getting into chambers and just being in the zone is what kind of eased my nerves a little bit because I wasn’t as worried about having to perform as much as I was just worried about doing my best I possibly could in the chamber at the time.”

Due to requirements from COVID-19, meetings are now set to be held on Zoom until gatherings are allowed. Typically, the teams would go to different schools and have a simulated feel of what a real Congress debate would be like. If you are interested in Congress, the best way is to join forensics and debate.