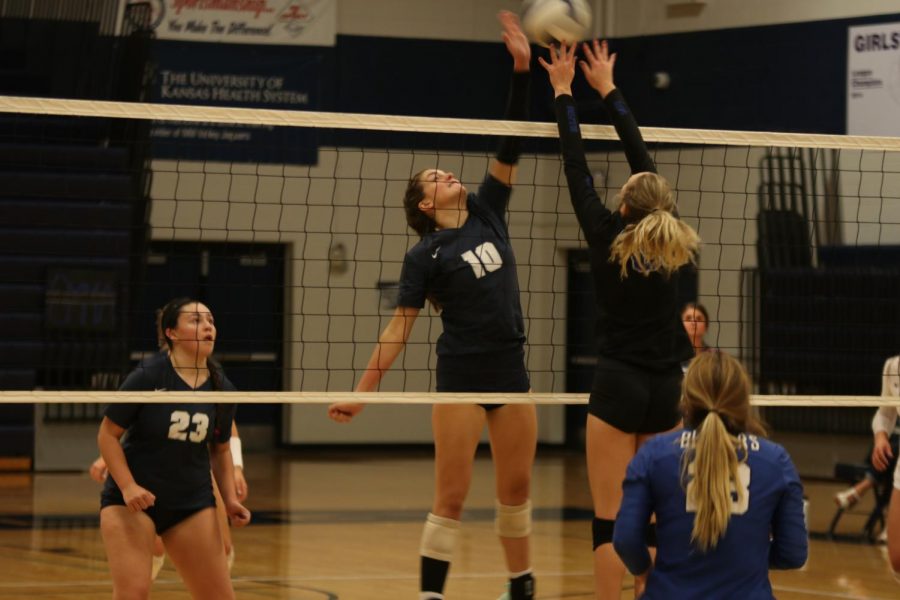 Thanks to their high energy, girls volleyball won the dual against Gardner Edgerton Tuesday, Oct. 23. The started off the night with two losses, losing their first set 25-20 and their second set 25-15, but ended the match with a final score of 3-2.

As the last regular home game of the season, senior night played a part in how senior Faith Archibong played.

“This is [senior Emma Fox’s] and I’s last home game ever, so our mentality was to win,” Archibong said.

After the first two sets, the team worked together to come back from their loss. Senior Emma Fox believed the team had more communication in their third set.

“Our game against Gardner was probably the quietest game all season,” Fox said. “Towards the end, we started to pick it up and come back from it, but we definitely were still pretty quiet. ”

During the third set, the Jaguars started gaining momentum, which led them to win 25-21.

In order to make the comeback in both the third and fourth sets, the team had to encourage each other, according to Archibong.

Because the team went on to win the fourth set, with the score 25-20, a fifth set was played to determine the winner of the dual. The Jaguars defeated Garner with a score of 15-12 in the final set.

Tension was high as the last set started, according to Fox the team needs to focus on working together.

Working together as a team, the players are going to focus on certain areas before their next game, according to Archibong.

“I think we really need to focus on our communication with our setters,” Archibong said. “That is the weakest point of our team right now, but we just need to work on the bond between our hitters and setters and we’re ready.”

The team plays next Saturday, Oct. 26 at 3 p.m. at Shawnee Mission Northwest against Olathe Northwest.