The team defeated Bishop Miege but fell to St. Thomas Aquinas in the triangular Tuesday, Oct. 15 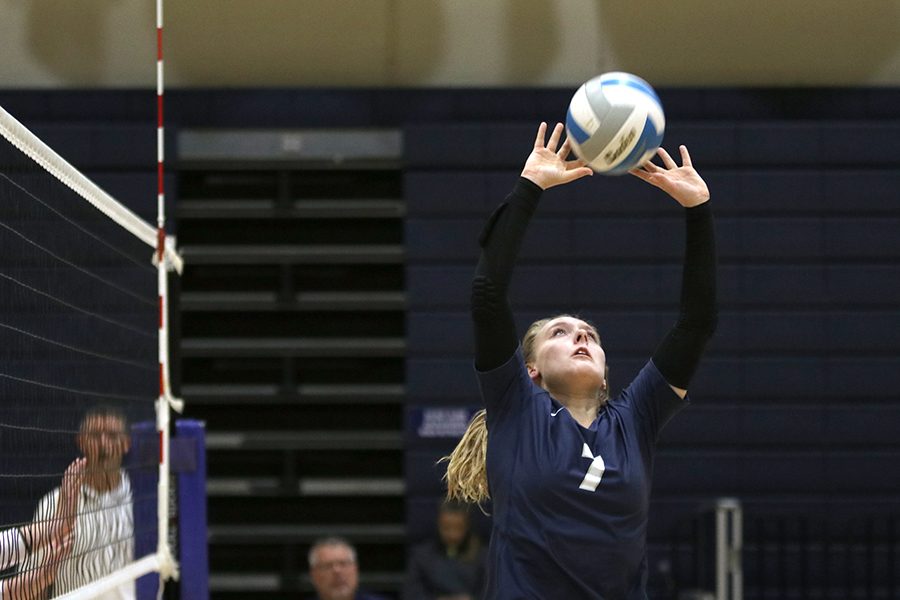 Extending her arms, sophomore Sydney Fiatte uses her fingers to set the ball to her teammate. The team competed in a triangular at St. Thomas Aquinas against Aquinas and Bishop Miege on Tuesday, Oct. 15. They beat Miege 2-0 but lost to Aquinas 0-2.

Although the team could not pull out a win against Aquinas, junior Molly Carr thought that the team fought hard and played their best.

“I think tonight we didn’t really struggle with anything,” Carr said. “Tonight was probably one of our best playing nights we’ve had all season.”

Sophomore Taylor Roberts, on the other hand, thought the team had small things they could have improved on in the second match.

“The first game we played aggressive. The second game… our serving wasn’t as aggressive and neither was our blocking or hitting,” said Roberts.

Both Roberts and Carr thought the the team’s success was due to their great teamwork.

“Tonight I thought our biggest strength was that we all worked together,” said Carr. “We were able to compete well because everyone was doing their jobs at the best of their abilities.”

Carr believes the team has improved over the course of the season and is ready for substate.

Come out to support the girls volleyball team at their last regular season home game on Tuesday Oct. 22 against Gardner.