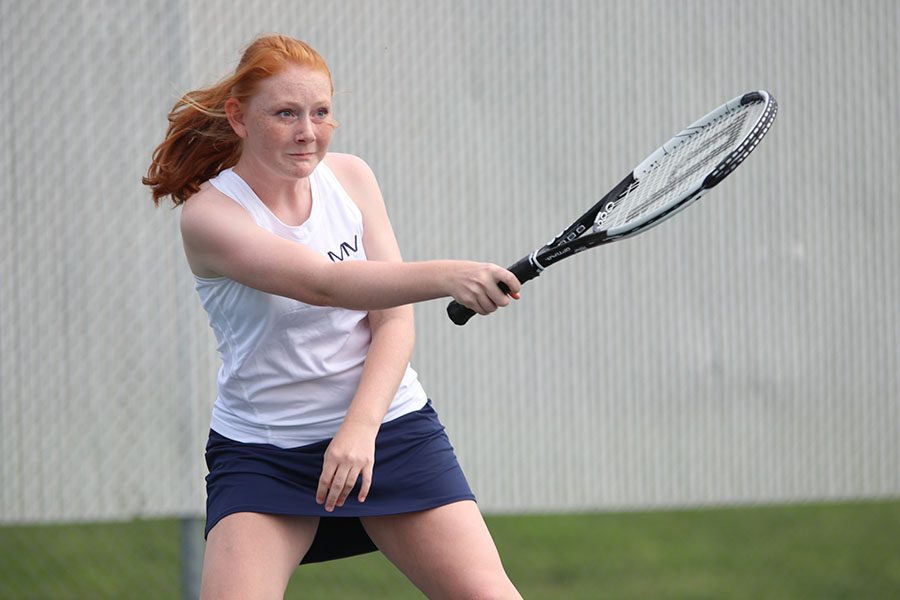 Following through on a forehand hit, sophomore Lauren Butler returns the ball to her opponent. She and teammate Carli Dupriest won this match against Olathe Northwest on Wednesday, September 4.

The girls tennis team got off to a good start this season with an all day tournament on Wednesday, Sept. 4. The team took first place against Gardner-Edgerton, Bishop Miege, St. James Academy, Lansing, Olathe Northwest, Spring Hill, Bonner Springs and Baldwin.

Head coach Steve Bock thinks this team holds a lot of promise for the season.

“It’s always better to underpromise and over-perform, but I think we are going to have a great season,” Bock said. “This year we have that team feeling, and we are really pulling together.”

Like any season, there will be challenges within the team.

“We have some tough decisions because we have so much talent at the top,” Bock said.

Sophomore Carly Hey has her own challenges for the season she hopes to overcome.

“I need to really work on bending my knees when I play, so I can be a stronger player and be more accurate,” Hey said.

There are seven seniors on the team, and Bock believes they have a big impact on the other players.

“One strength of our team has to be the senior leadership,” Bock said. “Everyone [is] being a team and working together to make each other better.”

Bock knows that it is not only the upperclassmen that are bringing something to the team.

“There are some good up-and-coming JV players, which means full roster and lots of energy,” Bock said.

Correction: An earlier version of this post said that the team placed fourth. The correct result is that the team won first place.