The Jags competed against eight other teams at the home invitational on Saturday, Sept. 15 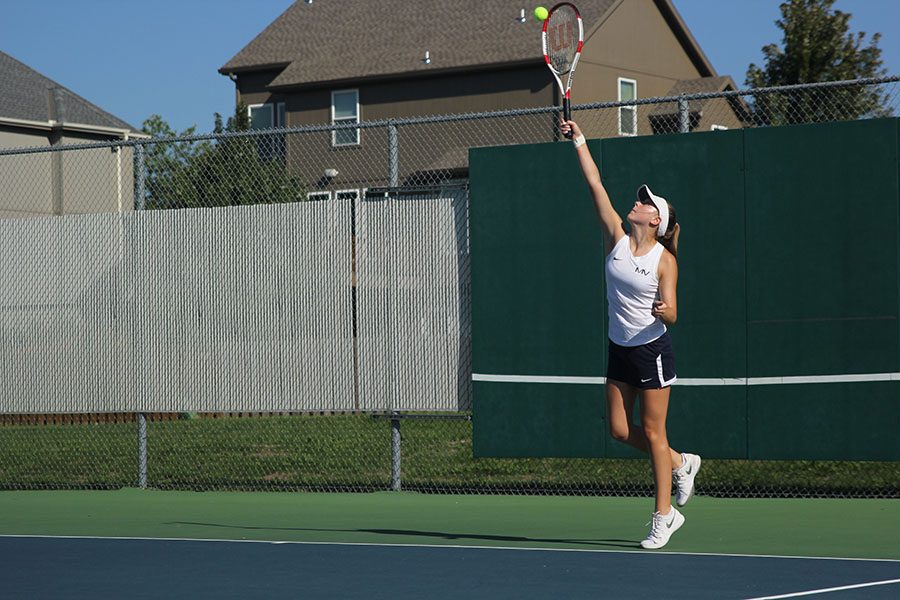 Serving in her doubles match, junior Sydney Day puts forth a powerful hit. ”Our match was really close. We went into a tiebreaker but ended up losing in the end,” Day said.

Placing first in her singles playoff bracket, sophomore Sophie Lecuru was pleased with her performance at the meet.

“I feel really good about the way I played because last year as a freshman I was really nervous for the tournament, and didn’t know what it was going to be like going into it,” Lecuru said. “This year I was happy with how things turned out because last year I got second, and this year I played the same girl, who’s a really good competitor, in the finals and this time I won.”

Fellow competitor, junior Sydney Day, also spoke about her own performance after facing a loss in a close doubles match.

“I definitely want to get better at the net, and just try to get every ball that I can,” Day said. “I could’ve been more aggressive, but I feel like the match as a whole was very competitive.”

In the future, the girls know that competition will be tougher, but players like Lecuru remain optimistic about their abilities.

“If we’re gonna be 6A, I know that it’s gonna be a lot more difficult to do as well at state, but this year I’d like to go to state. My goal is just to place,” Lecuru said.

Overall, the Varsity Jaguar Invitational was viewed as a great experience for the girls to grow closer as a team and strengthen their skills in the sport.

“The invitational is always a great time for team bonding, we’re there all day and we all get very emotional, there’s lots of tears, sweat and hospital visits,” Lecuru said. “Everyone played their hearts out too, so it was good to see what we accomplished.”